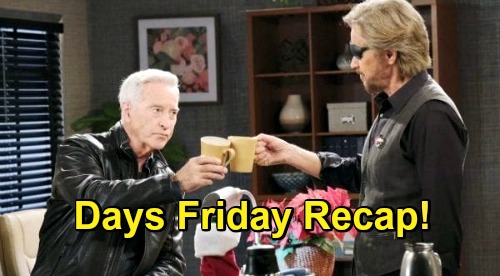 Days of Our Lives (DOOL) spoilers recap for Friday, December 25, reveal that John Black (Drake Hogestyn) and Marlena Evans (Deidre Hall) canoodled at the penthouse as Marlena brought in a delivery for John.

The delivery was a bottle of scotch from Steve Johnson (Stephen Nichols), along with a nice card to his friend. John ripped the card in two and wasn’t having any it. John fumed, saying that he was going to go tell Steve what he could do with that bottle.

Marlena said that John wasn’t going anywhere until he heard her out. Marlena pointed out that Steve was standing by his son just like she had stood by Sami Brady DiMera (Alison Sweeney) after Sami did questionable things.

John said it wasn’t the same, and Marlena pointed out that Steve simply didn’t believe the DNA tests, and that he was at least trying to bridge the divide.

At Charlie Dale’s (Mike C. Manning) apartment, Charlie tried to feed a still tied-up Ava Vitali (Tamara Braun) some food. Ava said the food was terrible, and Charlie threw it against the wall in anger. “It’s not like I had a Mom to teach me how to cook!” Charlie yelled.

Ava wondered why Charlie had come home early from his Christmas Eve gathering with Claire Brady (Isabel Durant), and Charlie admitted that Allie Horton (Lindsay Arnold) was there.

Charlie said that Allie hadn’t recognized him, but that she did have the feeling that she knew him from somewhere. Ava said that it was only a matter of time before Allie remembered that he was the rapist, and that Charlie should go to the police and confess.

Ava argued that if Charlie played it smart, then he might get some leniency in the end.

“How stupid do you think I am?!” Charlie yelled, saying that all Ava cared about was what happened to Tripp Dalton (Lucas Adams). Charlie then realized that since Ava was the only other person who knew about the rape, she had to go.

“Letting you go isn’t an option,” Charlie said menacingly. “I spent a lifetime watching you choose Tripp,” Charlie continued. “Now I choose me.”

At the Salem PD, Rafe Hernandez (Galen Gering) was working when Nicole Brady (Arianne Zucker) stopped by to return the gloves that Rafe left at her apartment last night.

Nicole thanked Rafe for having dinner with her, and then she saw Ava’s file on Rafe’s desk. Rafe disclosed that Tripp thought Ava was missing, and Nicole persuaded Rafe to go to Ava’s apartment to talk with Tripp to make sure everything was ok.

At Ava’s apartment, Lucas Horton (Brian Datillo) told Tripp that he was going to make sure that Tripp paid for what he did to Allie. Lucas insisted that he didn’t sleep with Allie, consensual or otherwise.

This enraged Lucas, who barged his way into the apartment and ranted at Tripp, saying that if he had a gun, he’d point it between Tripp’s legs and pull the trigger.

“Your daughter already tried that,” Tripp said. Lucas beamed as he heard the story of Allie holding Tripp at gunpoint, and Tripp told Lucas to get out. Lucas then picked up a pair of scissors sitting nearby and threatened Tripp with them.

As Lucas was lunging at Tripp, Rafe appeared, telling Lucas to stop. Eventually, Lucas forked over the scissors and was peeved as Rafe made him leave.

At the hospital, Kayla Brady (Mary Beth Evans) was working in her office when Steve came by with some yellow roses for her.

Soon, talk turned to Tripp, and Steve revealed that he had talked with Allie about the night she was raped, and that she remembered two things – Tripp standing over her while she was in bed, and a hand holding her wrist down as she said no.

Steve shared his theory that someone else could have come into Allie apartment that night after Tripp left – someone who is related to Tripp. Kayla thought it was far-fetched and that it would have to be a close relative to explain the DNA tests.

The conversation was then interrupted as John walked in. Kayla took off, and John extended friendship to Steve, asking him to join him in a drink from the bottle of scotch that Steve had given him.

Claire asked what Allie thought of Charlie, and Allie said he was cute and seemed so familiar. Charlie’s gift to Clare happened to be sitting around, and Allie suggested that Claire open it now.

Claire opened the gift, and it turned out to be concert tickets to Claire’s favorite band on Valentine’s Day. Allie thought that Claire should go over to Charlie’s place and surprise him by taking him his gift.

Later, Allie stopped by Marlena and John’s penthouse. Marlena was there alone, and she invited Allie and Henry Horton (Jayna and Kinsley Fox) in. Allie emotionally told Marlena about telling Sami about her rape, and Marlena comforted Allie gently.

Back at the Salem PD, Tripp formally filed a missing person’s report on Ava, but Rafe cautioned that Ava might have skipped town intentionally. Tripp didn’t buy it, and he said that he had the feeling that Ava was in trouble.

Back at Charlie’s apartment, Charlie held Ava’s gag in his hands, preparing to strangle her. “I won’t let you stand in the way of my shot at real love,” Charlie said.

“This will be our first and last Christmas together.” Charlie gagged Ava again, and just then Claire knocked on the door. Charlie looked stunned and didn’t know what to do.

That was a great Christmas episode of Days of Our Lives, and there will be much more to come next week, so stay tuned! We’ll give you updates throughout the weekend as more DOOL news comes in. Remember, CDL is your go-to source for all the latest Days of Our Lives spoilers, daily episode recaps, and news.