BY hellodrdavis on May 15, 2020 | Comments: Leave Comments
Related : Days of Our Lives, Soap Opera, Spoiler, Television 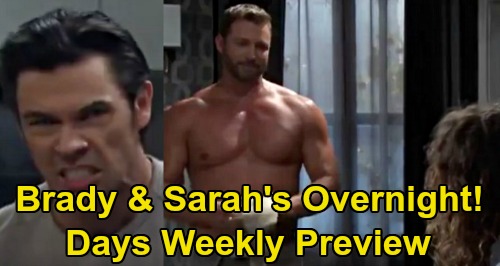 The new Days of Our Lives (DOOL) spoilers preview teases that viewers are in for a big week on the NBC soap. The new DOOL promo for the week of May 18th moves fast and foreshadows some major drama, so let’s get right into it!

We’ll see if Cara goes full “bridezilla” for this big wedding, but one thing’s for sure – she’ll have a big task on her hands as she has to tell Grandpa Victor Kiriakis (John Aniston) that she’s marrying the former serial killer.

Victor doesn’t much care for Ben, and he doesn’t want Ciara marrying him, so he’ll have some choice words for Ciara.

Ciara’s shown in the promo telling Victor in his hospital bed that she and Ben are engaged. Victor dryly says, “And that’s the good news?” Something tells us that Victor’s not going to ever be convinced that this marriage is a good idea!

Next, the promo addresses the situation between Gabi DiMera (Camila Banus) and Dr. Wilhelm Rolf (William Utay). As DOOL viewers know, Rolf sent Gabi off somewhere to retrieve his special memory serum, and Gabi attempted to inject it into Jake Lambert (Brandon Barash).

Gabi is sure that Jake is Stefan DiMera (Brandon Barash), and she promised she’d get Rolf released if he gave her that serum.

Well, in the Days of Our Lives preview promo, Gabi is shown talking with Rolf from the SPD interrogation room. According to their deal, Gabi will need to help Rolf even if the serum doesn’t work, but what if Rolf just led her to a fake serum?

It seems like he might have, since Gabi fumes at Rolf in the promo, saying, “You set me up!” Rolf then proceeds to tell Gabi that he doesn’t like her, so that doesn’t sound good for Gabi.

Meanwhile, Chad DiMera (Billy Flynn) is shown in a quick flash telling Abigail DiMera (Kate Mansi) that he loves her. As Days viewers know, Abigail has been hallucinating as a result of being drugged by someone.

The drug, which was manufactured by a DiMera Enterprises affiliate, is still causing Abigail to have terrible hallucinations. According to DOOL spoilers, Chad and Abigail will soon make a decision about a treatment for Abigail, which looks to be out of town and far away from Salem.

Sonny Kiriakis (Freddie Smith) is also shown briefly in the promo, snarling at Evan Frears aka Christian Maddox (Brock Kelly) that he hates him. It appears that Sonny is visiting Evan in the prison visiting area.

Evan was recently convicted of Jordan Ridgeway’s (Chrishell Stause) murder and sentenced to 20 years, but it’s more likely that Sonny is visiting Evan for another reason.

Days of Our Lives spoilers say that Sonny will urge Evan to come clean about something, and it will likely be about Maggie’s innocence. But will Evan comply? Sonny’s fierce reaction to Evan makes it seem like Evan will balk.

Next, the new DOOL prreview for the week of May 18th addresses a big deception that will take place involving Sarah and Brady Black (Eric Martsolf). According to DOOL spoilers, Sarah and Brady will find themselves commiserating together about their situation vis a vie the baby switch and its ramifications.

It looks like Sarah and Brady will spend the night together, although they won’t ultimately be intimate with each other.

Sarah and Brady are shown in the promo at the Brady Pub, toasting to “sweet revenge,” as they decide to allow Xander to keep on believing that they slept together. Sarah will think that it serves Xander right.

Orpheus wants some cash in exchange for John so he can go make a life with his grandson David Ridgeway (Caleb and Kyler Ends), and he thinks that Marlena will do anything to get John back.

In the promo, Orpheus is shown on the phone saying, “You’ll never see John again,” as John is gagged and tied up in some remote location.

It looks like a dangerous scene, but DOOL spoilers say that Marlena will enlist the help of Hope Brady (Kristian Alfonso) and Steve Johnson (Stephen Nichols) soon enough, and they’ll end up rescuing John, but there should be some tense scenes as John is at Orpheus’ mercy.

It looks like we’re in for an exciting week, so stay tuned! We’ll be sure to give you updates as more DOOL news comes in. Stick with the NBC soap and keep CDL at the ready for the latest Days of Our Lives spoilers. We’ve got your daily recaps and news as well!