Days of Our Lives Spoilers: What Will Happen To Ben & Ciara – ‘Cin’ Danger and Heartache, Big Trouble On The Way?

BY hellodrdavis on May 12, 2020 | Comments: Leave Comments
Related : Days of Our Lives, Soap Opera, Spoiler, Television 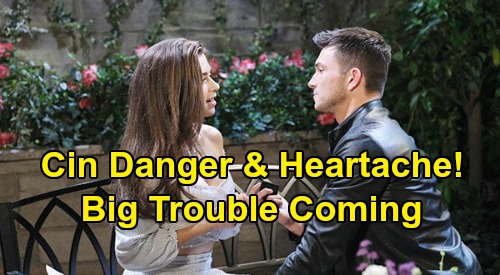 Days of Our Lives (DOOL) spoilers tease that Ciara Brady (Victoria Konefal) and Ben Weston (Robert Scott Wilson) are going to have something big to celebrate. As DOOL viewers know, Ben has just sweetly proposed to Ciara via a fortune cookie message. Ciara will happily accept Ben’s proposal, and the two will be over the top happy.

It looks like life will finally be taking a happy turn for Ben and Ciara, and it will be great to see. “Cin” fans will be thrilled as Ben and Ciara plan their nuptials and prepare for their life together. It certainly looks like “Cin” will be in for some great times ahead, and their wedding is sure to be one to remember. But Ben and Ciara’s happiness can’t last forever.

After all, DOOL has to have drama, and all couples go through their challenges on the show. There’s no reason Ben and Ciara should be any different! In a recent interview with Hollywood Life, Victoria Konefal indicated that Ciara would be faced with some big challenges that would test her character, and that there would be a lot of strife.

It certainly sounds like Ciara will go through something major, and that will probably impact Ben in a big way, too. Victoria said during the interview that things would get very difficult for Ciara in the coming weeks, so something big is going to happen to throw a wrench into her happy existence with Ben.

So, what could be in store for Ciara that could threaten “Cin?” Well, one possibility has to do with the return of a couple of characters set for later in the year. Eve Donovan (Kassie DePaiva) will be returning to Salem, and she could cause some turmoil for “Cin.”

As DOOL viewers know, Eve detests Ben for killing her daughter Page Larson (True O’Brien) and she’s even been physically abusive with Ben in the past.

Eve’s animosity for Ben runs deep, and it would be just like her to try to make trouble for Ciara and Ben in any way possible. Ciara could wind up in an antagonistic relationship with Eve as the women clash over Ben. With Eve right there to constantly remind Ciara that Ben was a cold killer at one point, things could get difficult.

Claire Brady’s (Olivia Rose Keegan) return could also cause turmoil for Ciara. It’s hard to tell what kind of shape Claire will be in when she returns. After all, Bayview seems to have a reputation of releasing patients before they’re ready to rejoin the world!

At any rate, Claire could still have some pent-up animosity toward Ciara that needs to play out, which is certainly something that could test Ciara in a big way.

Or, perhaps the thing that will end up testing Ciara’s character has to do with Ben himself. Ben has been psychologically stable for some time, ever since he started taking his meds faithfully.

But what if Ben has some sort of break with reality again, and Ciara has to deal with that harsh reality? That could be pretty scary, especially if Ciara and Ben are planning on bringing kids into their marriage.

We’ll see what happens with Ben and Ciara going forward, but the good news here is that we should see them go through a relatively stress-free, happy period before all this turmoil sets in.

What do you think will be “Cin’s” big upcoming challenge? Stay tuned to DOOL and keep checking CDL for the hot new Days of Our Lives spoilers, updates, and news.