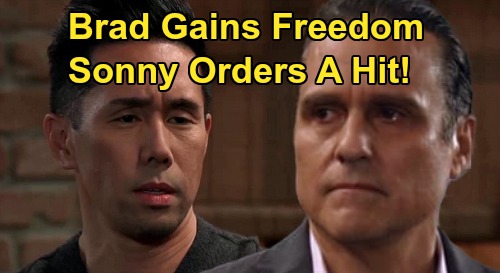 General Hospital (GH) spoilers tease that Brad Cooper (Parry Shen) will threaten Julian Jerome (William deVry) and hope it works out well for him. Julian will be anxious when he arrives to see Brad in lockup on Monday, February 24. Sadly, Brad’s demeanor won’t do anything to ease Julian’s mind. It won’t be long until Julian realizes Brad is a total train wreck.

That’s because Nelle Benson Archer (Chloe Lanier) has turned on Brad and is making a bad situation even worse. Brad will contemplate ratting Julian out in hopes of reducing his sentence. He’ll feel like things might go better for him if it looks like he had a partner in crime – especially since Nelle claims she isn’t one.

However, Julian will do his best to keep Brad’s mouth shut. They’ll argue about what Julian’s involvement would do to Lucas Jones (Ryan Carnes), who’s already struggling right now.

Julian will assure Brad that he can get him an excellent lawyer, which will spark Brad’s blackmail plot. He’ll make it clear that this lawyer will have to help him beat the charges or else Julian’s downfall could be looming.

Of course, this presents the opportunity for Brad to indeed walk free. It’d be smart since Brad’s such a great schemer. General Hospital probably doesn’t want to get rid of Brad, so this could be their path to keeping him. That doesn’t mean there won’t be danger though. Since Sonny’s so riled up, maybe Brad would be safer behind bars!

Sonny’s dealing with a lot right now due to the whole Cyrus Renault (Jeff Kober) situation. However, it’ll take some time for Brad to get off the hook, too. Sonny may finish dealing with Cyrus just in time for Brad’s freedom to be secured. Julian tried to kill Brad – and Sonny’s just as ruthless. Is another murder attempt brewing in Port Charles? Will Sonny order a hit on Brad if he winds up a free man?

General Hospital spoilers, updates and news say Brad could land in deadly peril if he’s not careful. Sonny’s the kind of guy who takes revenge plots seriously. On the bright side, a good dose of suffering can be helpful in cases like this. Lucas admitted he couldn’t share the same disdain for Brad as Carly and the others. He knows Brad loves him as well as Wiley Cooper-Jones (Theo and Erik Olson).

Lucas moment of compassion could pave the way for more – perhaps after Brad’s looming near-death experience. Whatever the case, Sonny could plot lethal trouble down the road. General Hospital spoilers say the action’s about to heat up, so don’t miss all our GH updates and news here at CDL.