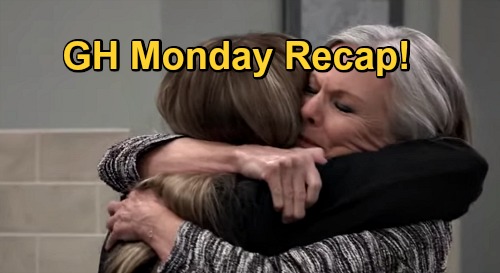 Julian was packing a bag, and Ava fumed that two people were dead because of what Julian did. Julian said that only Jason Morgan (Steve Burton) was supposed to be in the building when it exploded, and that Cyrus Renault (Jeff Kober) didn’t give him a choice in the matter.

Ava said that everyone had a choice, and Julian wondered if Ava had a choice when she shot Connie Falconeri (Kelly Sullivan). Ava didn’t appreciate that remark, noting that she shot Connie because of Julian. “Keep packing – I want you out of here by dawn,” Ava ordered.

Meanwhile, Jason and Sonny Corinthos (Maurice Benard) talked on the terrace at the Corinthos home. Sonny told Jason that he had an idea about who set the bomb at The Floating Rib.

In the living room, Sam McCall (Kelly Monaco) tried to get Alexis Davis (Nancy Lee Grahn) to stay for Thanksgiving dinner, and Sam told Carly Corinthos (Laura Wright) that Alexis didn’t remember being dragged to the house in the middle of the night.

Carly tried to tell Alexis that the house was the safest place for her right now, but Alexis got indignant and left, saying that she’d be safer anywhere else – anywhere where Jason and Sonny weren’t.

Alexis made a snide comment about it being more important to Sam to be loyal to Jason than to be a responsible mother, and she walked out.

Sonny and Jason walked into the room, and through conversation with Sam and Carly, they realized that Cyrus must have known somehow that Jason was going to be at The Floating Rib.

Carly mentioned that she had a new bartender named Eli that they hadn’t run a background check on yet, and Sonny and Jason deduced that the bartender must have overheard Jason’s plan and reported back to Cyrus. Carly said that Eli was working today.

Sonny and Jason took off, and Carly noticed that Sam wasn’t doing well. Sam said that the hours she spent thinking that Jason and Danny Morgan (Porter Fasullo) were dead were awful, and that she didn’t want Scout Cain (Emma Ramacieri) to grow up being used to this kind of thing.

Carly listened to Sam and said that she got it, but that Sam knew who Jason was when she got involved with him.

“What if I can’t live with it anymore?” Sam asked. Carly said that Sam was just scared and that she needed to talk about it.

Sam lamented that she and Danny could be with Jason when someone tries to kill him again, and she said that her engagement to Patrick Drake (Jason Thompson) had been such a relief because life felt normal.

Sam said that she felt that her loyalty to Jason was in direct competition to her instincts as a mother. Carly said that she understood and that she’d been there, but that it came with the territory. “I know, and that’s why I can’t sleep at night,” Sam said.

Meanwhile, in the foyer, Olivia Quartermaine (Lisa LoCicero) told Ned Quartermaine (Wally Kurth) and Monica Quartermaine (Leslie Charleson) that she was in charge of Thanksgiving dinner, and that Dante Falconeri (Dominick Zamprogna) had asked her to make this day normal for Rocco Falconeri (O’Neill Monahan). “We’re all going to have a traditional Thanksgiving this year,” Olivia proclaimed.

The doorbell rang, and it was Alexis, whom Olivia had invited to dinner. This shocked Ned, and as Ned took Alexis’ coat, he asked if Alexis could stay sober for the day.

Suddenly, Robert Scorpio (Tristan Rogers) arrived, also having been invited by Olivia. Olivia told a very uncomfortable Ned that she wanted to play cupid for Robert and Alexis.

Robert and Alexis weren’t the slightest bit interested in each other, and Robert privately told Olivia in the foyer that this wasn’t a good idea.

Back in the living room, Ned and Alexis put their heads together and started talking about their affair…just as Robert entered the room and heard the whole thing. Alexis stepped away, and Robert moved in menacingly on Ned.

“I don’t know what I stumbled onto, but Olivia is my friend. You hurt her and you’ll still be in a wheelchair at Christmas,” Robert warned. Suddenly, Olivia wailed from the foyer, having a major meltdown over the turkey being ruined.

Monica stepped into comfort Olivia, saying that no Quartermaine has had a successful Thanksgiving dinner since the 1980s. “I think I know what we all need to do next,” Monica said.

Meanwhile, in Sasha’s room, Epiphany Johnson (Sonya Eddy) greeted Sasha as she woke up for the first time since her overdose. Sasha was shocked to learn that she had a heart attack last night caused by the illegal drugs she consumed.

Sasha was also surprised to learn that Michael was at her bedside all night, and when a new visitor arrived to see her, she immediately thought it was going to be Michael, but it was Brando.

Brando listened as Sasha downplayed her occasional drug use, and Brando called Sasha on being an addict, just like him. Brando said that he recognized all the signs.

Brando shared about his drug addiction after his tour, and Sasha told Brando about how she started using drugs at the photo shoot for Deception. Still, Sasha insisted she wasn’t an addict, and Brando reminded her sternly that she had a heart attack.

Brando told Sasha off-screen about the explosion and Dev’s death, and he said that he wanted to help her to feel useful. Sasha suggested that they take a couple of laps around the nurses’ hub.

Outside Lulu Spencer’s (Emme Rylan) room, Laura Collins (Genie Francis) was on the phone with Tracy Quartermaine (Jane Elliot), who reported that there was still no word from Luke Spencer (Anthony Geary). Tracy wished Laura and Lulu well, and she said she’d be in contact immediately if she heard from Luke.

In Lulu’s room, Dante told an unconscious Lulu that he hated all the time he spent away from her, and that he’s supposed to be right by her side. Dante urged Lulu for a Thanksgiving miracle and asked her to wake up.

Back outside Lulu’s room, Nikolas Cassadine (Marcus Coloma) found Laura and reported that Kevin Collins (Jon Lindstrom) was on a call with Patrick and Griffin Munro (Matt Cohen), and that they seemed to concur with Lucas Jones (Matt Trudeau) that all anyone can do for Lulu is to wait and hope.

Laura told Nikolas that she was trying to track down Lucky Spencer (Jonathan Jackson) and Ethan Lovett (Nathan Parsons), and that they were going to have to make decisions about Lulu soon.

Laura then went into Lulu’s room to talk with Dante, saying that she wanted him to have a voice when it came to Lulu’s care. Laura said that Lulu wasn’t supposed to wake up anytime soon, and that GH and Port Charles might not be the right place for her. “You’re going to send her away?

You’re giving up on your daughter?” Dante said, then he asked for time with Lulu, and Laura left somberly.

Elsewhere, Ava caught up with Nikolas, wondering why Lulu hadn’t been discharged. Nikolas sadly told Ava about Lulu’s collapse and her condition, and Ava was horrified as she privately realized that her brother caused this to happen.

Ava then learned that Franco Baldwin (Roger Howarth) was hurt, and that Elizabeth Baldwin (Rebecca Herbst) and Cameron Webber (William Lipton) were in the blast, too.

Nikolas realized suddenly that he hadn’t figured out an escape plan for Julian, but Ava said that she’d take care of her brother. A bit later, Laura and Nikolas were talking in the hallway when Dante walked up along with Epiphany, who said that Laura had some visitors.

All of the Quartermaines walked around the corner and Laura saw them all there to support her and broke down crying.

There were hugs all around, and Monica said that today was about family. Laura was truly touched. Off to the side, Michael and Dante talked about long-term care facilities. Dante said that it just felt wrong to him, but Michael said it was what Lulu needed, and that Laura would never give up on Lulu.

Michael went back to Willow and was talking with her softly when Sasha and Brando came around the corner as they were walking laps around the nurses’ hub. “Last year at this time, that would have been me,” Sasha said sadly. Michael noticed as Sasha and Brando walked off.

Meanwhile, Dante approached Laura near the elevators and apologized for his words earlier, saying that he was out of line. “We have to do what’s best for Lulu’s care,” Dante said, taking Laura’s hands. “I’m never going to stop loving your daughter,” Dante said. Laura said that she knew.

Monica then called everyone around the nurses’ hub to say that it’s Thanksgiving, and that they’re all here because a friend is hurting. Monica led a group prayer, then Ned and Olivia brought in pizza for the group.

Suddenly, Tracy got off the elevator and rushed up to Laura, embracing her and sobbing with her as Laura told Tracy thank you for being there.

At the Metro Court, Sonny and Jason stalked Eli the waiter on the terrace. Jason manhandled Eli as Sonny said that they were going to get some answers from him. Jason asked if Eli passed off information to Cyrus about him being at The Floating Rib. Eli admitted it, saying he’s a new guy in town and Cyrus paid him for information.

“Anything else?” Jason asked Eli. Eli said that Cyrus made him pass a message to some guy to drop off a package at The Floating Rib. “Who’d you call?” Sonny asked. Eli said that the number was still on his phone. Sonny grabbed Eli’s phone and called the number…and got Julian’s voice mail. Sonny reeled.

Finally, back at Wyndemere, Ava returned to the room where Julian was still packing. “We need to have a talk, big brother,” Ava said, as the camera revealed that she was holding a gun behind her back.

That was a terrific episode of General Hospital, and there’s plenty more coming this week, so stay tuned! We’ll give you updates as GH news comes in. Stick with the ABC soap and don’t forget to check CDL regularly for the latest General Hospital spoilers, daily episode recaps, and news.