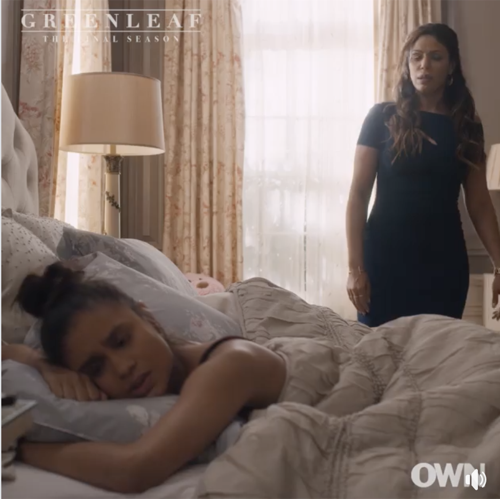 Tonight on the OWN their new series following the Greenleaf family called Greenleaf with an all-new Tuesday, July 21, 2020, season 5 episode 5 and we have your Greenleaf recap below. In tonight’s episode called, “The Fifth Day,”  season 5 episode 5 as per the OWN synopsis, “Holding a small service at home, the Greenleaf family contemplates its future and what it might mean to start over. Noah shares an insight into the house’s history; Lady Mae goes to see Tara James and returns with a startling revelation.”

Grace tries to get Sophia up for Mae’s last sermon. Jacob and Kerissa talk about how he is going to tell Zora about their separation after church today. She isn’t happy and is surprised he is going against Mae’s advice.

Later, Charity plays a song on the piano as Mae begins her service. Mae tries to keep them all on track as they think about Cavalry. Kerissa and Jacob exchange jabs. James tells them to settle down. At breakfast, Sophia tells Zora how her photos are still being shared. Noah and Grace laugh over old times. Mae takes off to see Tara about the house. James warns her to be careful.

Mae arrives to see Tara. They talk about Tara’s church and her community. Mae is surprised by how small it all is and why Tara would want the house. Tara tells her she could turn it into a shelter for needy women and their children. Mae is left without much to say. She asked God for new beginnings.

James shows AJ a crate that has car pieces in it. He asks him if he knows anything about cars. The car in the crate was given to James by his dad as a lesson. AJ is happy when James says he will give him the car of they build it together.

Grace tells Noah how she is trying to stop the church from being torn down. They move on to talk about AJ. Noah shares that their time has been low key. He sees Grace is stressed and tired. She admits she has had a lot to think about. She didn’t sleep last night after Tara called. He pulls out a pillow and gets her to rest her head on his lap.

Karina tells Charity how Phil and Judee are way too excited about tearing down the church. Sophia and Zora talk more about Sophia’s photo problems. Zora doesn’t think she needs to change her life plans. Jacob and Kerissa come in to tell Zora they need to talk.

Charity calls Yusef. He doesn’t hang up, telling her she has 2 minutes. Meanwhile, Mae comes home and tells James she thinks you might have to give Tara the house. He is taken aback.

Grace wakes up after falling asleep on Noah. Noah tells her about a book he found that was written by the care taker of the home. James interrupts to tell Grace he needs help. James tells Grace that Mae is thinking of giving Tara the house. They talk about paying Tara off.

Zora is alone, crying, upset about Jacob, and Kerissa’s divorce. Meanwhile, Charity asks Yusef what his wife had to do with Edenvale Lending. He refuses to answer her, hanging up.

After telling AJ everything, Sophia doesn’t want to go back to school. She wants to stay. He tells her she needs to man up. She has to face this. Look at what he is facing.

Grace finds Zora alone and crying when she goes to find the book Noah was talking about. After comforting Zora, Grace finds the book. She looks over it. Meanwhile, Mae and James talk about the house. Mae thinks she is going to give Tara the house. Charity comes in. They are all going to see the church one last time.

The family arrives at the church to take one last look around and say thank-you. They spend some time in the auditorium, on stage, holding hands talking about the past and the future. James tells Mae to give Tara the house if she wants. Mae believes she will if God wants her to.

Mae and James pay Tara a visit. They see Rochelle as she makes her way out of the door. They do not look happy, turning to look at Tara.