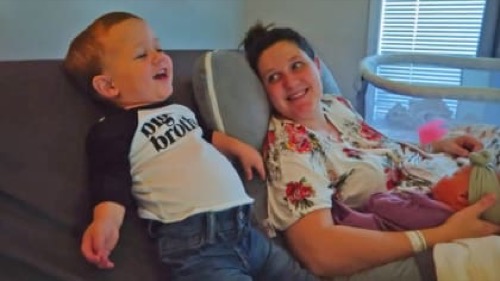 Tori struggles with her recovery from the C-section, while Matt and Caryn find new ways to entertain little Jackson. Then, Amy and Chris move one step closer to moving in together.”

Lilah is born, she is out and breathing. When they put her on Tori she was crying a lot. She can barely remember what happened because it was so surreal. It was all good. Zach cut the umbilical cord.

At Amy’s house, Zach calls with the news, Lilah came two hours early; Amy is on her way and couldn’t be happier. Everyone is ok, Tori is fine. Zach sent her a picture of him holding Lilah.

At Matt’s house, Jackson is reading a book when Matt announces that Lilah had arrived, 8.9 pounds. Matt gives Tori and Zach time to get used to their new world, he decides tomorrow will be soon enough to meet Lilah.

Gary and Kim, Tori’s parents, are at the hospital to see Lilah when she arrived. Amy arrives too and tells them that everyone else will visit tomorrow. Amy is very excited for Zach and Tori, they planned another child and Tori wanted a girl. Amy holds Lilah and can’t hold back the tears, what a blessing and miracle of life.

Matt’s house, Jackson is playing, Matt thinks it is a lot of work because he is very active, a ball of energy. Caryn and Matt are excited to go see Lilah. Matt tells Jackson that he is going to have to show Lilah around. Zach calls, he says good morning to Jackson. Zach tells them that everything is going well. Zach shows a video of baby Lilah. Zach says she is a really good baby so far. Matt tells Zach that they will be there later on. Matt thinks it is going to be interesting to see how Jackson responds to Lilah the first day he sees her.

Jackson is at the hospital, right from the start Tori could see things were not going as planned. Jackson was staying far from the hospital bed and he wanted to leave. Jackson throws himself to the floor and refuses to go over to Tori. Caryn is holding Lilah, Matt is with her. Jackson wants to do his own thing. Eventually, Zach picks up Jackson and puts him in Tori’s arms. They let him hold the camera and tripod which catches his interest. Caryn tries to come close to Jackson with Lilah and Jackson goes to hide beside Zach. The whole hospital thing seems to be too much for Jackson.

At Zach and Tori’s house, Amy brings over a couple of day’s meals for them. Hopefully, this will help with Zach not having to go to the grocery store and he can concentrate on his family. Murphy is giving Amy a hard time, he won’t listen to her but takes him outside and he looks happy.

Amy is at the hospital, not quite 24 hours since Lilah arrived, and all is going well. Amy loves watching Zach be a dad and Tori be a mom. Lilah is super calm. Tori finds recovery in the hospital was harder, she tried to do it without drugs, but that didn’t work. When Tori first got out of bed, she felt like she was hit by a truck. They talk about Jackson, Amy says it must have been hard to see his mom in an environment that he wasn’t used to, he probably just needs time. Zach is changing Lilah’s diaper, he tells Tori that she is a diva, she doesn’t like the cold wipes.

At Matt’s house, Jackson is having fun, it’s there last day. Time for Jackson’s nap, Matt is going to get him ready for nap time. Back in the day, Matt remembers changing the boys and they knew his physical limitations and helped him. Jackson is very good, he just goes along with it. The only thing is, Matt uses a lot of wipes. Jackson claps his hands and cheers, grandpa, on.

Caryn tells Matt that she is really proud of him, he says he has a new appreciation for Amy and how she managed with twins.

Amy and Chris are looking at paint colors for the new house. This is their first time doing a home project together. By no means is Chris an expert, but he shows Amy what he knows. Amy thinks it was an opportunity to work together, and she loved it. Christ thinks they make a good team. Amy feels good about her future. Caryn and Matt are returning Jackson back home, Zach comes out with baby Lilah to welcome Jackson.

Matt walks up to see Lilah and says she is so quiet. The first night home with her was ok, nurses do a lot, and now Zach has to step in and help a lot. This time is different, they now have Jackson as a toddler to add to the situation. Watching his dad be a grandpa is great, Jackson loves him. Matt holds Lilah and Zach helps Jackson into the house. Matt and Caryn give Jackson hugs and leave. Matt can’t wait to watch his grandchildren grow up on the form.

Jackson is hyper, Zach and Tori have to remind him to be calm. Jackson still doesn’t want anything to do with Lilah.

Three weeks later, Lilah is settling in good. It’s a little chaotic and a little louder, but they signed up for it. Lilah is a good eater, a little fussier, maybe a little bit of a princess. Tori says she has an opinion, she is a strong woman. Zach asks Jackson if he likes his sister, he says mmm-mm. He still won’t kiss her, he won’t hold her or touch her. The kids are on different schedules, they just have to divide and conquer. When asked about a third child, Tori says hell no. Zach is all in and Tori tells him to hush up.