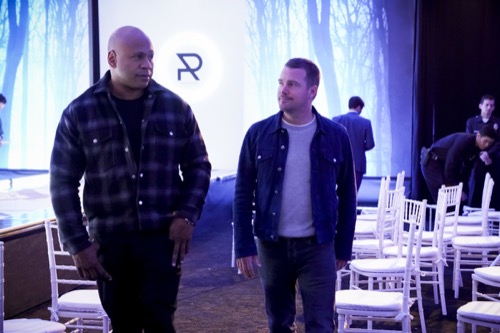 Roberta Deeks is training for a 5K. Deeks’s mom made a New Year Resolution in which she said she was giving up shame and embracing the fear. She was going to put herself out there. She was so hyped that she was sharing whatever came into her mind with her son. Deeks pretended to mind, but he was glad his mom was happy and he was also glad to have a moment to relax. The team finished wrapping up a case. They were now free as a bird and so each member was doing their own thing.

All that it is except for Sam and Kensi. The two of them were the ones that took down Lt. Commander Daniel Palmer and they thought it was odd how their suspect jumped back on his feet after falling through a skylight, but they didn’t know how odd until they talked to the Medical Examiner. The ME said Palmer was on Veridol. Veridol was a new black market opiate and it seems to have killed a bunch of people in the past three weeks. It was as if someone had dumped a large supply in the city and it was just getting around to killing people.

Kensi and Deeks thought that warranted an investigation, So, they brought this case to the team and suddenly their time for relaxation was over. Not that everyone was happy with it. Deeks had tried complaining and he even tried to give this case to the DEA, but the team said the drugs could be funding terrorism and so they stuck with the case. Deeks later interrogated a drug kingpin with Callen and Sam went with Kensi to chase down their one VIC without a name. The body of John Doe was lying in the morgue unclaimed.

No one was asking around for him nor did he fit the type like all the other victims. John Doe was Asian and the black market drugs could have been shipped from that region. They usually were. Sam and Deeks found where the body had been found and they used security footage to find the moment he had been left on the sidewalk because that’s what happened. John Doe didn’t die where he was found. He was left there and the duo found the exact moment when a car pulled up to throw his body out of the car.

The only thing found on the victim was cigarettes. Foreign cigarettes that Nell traced back to Vietnam and so they at least knew where he was from, but Eric also found footage of their victim while he was alive and visiting a business. The business owner was overextended and he might have turned to drugs for the consistent cash flow. But neither Kensi nor Sam were going to get answers from him because he quickly lawyered up and so Deeks and Sam had to push a little harder on their lead.

Deeks and Callen found a drug dealer that was pushing Veridol. Their guy was a middleman with no info on his bosses and so all he did give them was that the drugs were being pushed fast. They were coming into the city fast and they leaving at the speed. Kensi and Sam meanwhile got a tip from Nell. Nell traced the car that dropped off the body. It led back to a group of Asians and yet they didn’t have any drugs. They had a bunch of weapons and no one was saying what they needed those weapons for.

They were, however, repeating old Indonesian Nationalism. They gave that to Nell and she found out their suspect was Indonesian. He recently came into the city with wanted criminal Oscar Suhin. Suhin also seemed to be the one running things. The middlemen that Kensi and Deeks were dealing with were all drugs and the drugs were probably how Suhin controls his men. Well, that and fear. Their suspect hadn’t wanted to say anything because he had been afraid of Suhin and what Suhin might do to his family. And so they only got him to talk by telling him that Suhin was going to kill a whole bunch of people if he didn’t help.

So, they got the story. Suhin came to the country because he was trying to stop Dev Jabar. Jabar was the businessman that was overextended and the reason for that was because he was giving a lot of money to the country of Bangladesh. Suhin was hoping organized crime could gain a footing in the same country, but Jabar was slowly lifting the economy and no one was going to buy what Suhin was selling if Jabar remained alive. And so Suhin came out of hiding because he was going to kill Jabar himself.

Jabar was at a charity fashion show. The team stationed themselves all around him and the moment Suhin made his move – they made theirs. They took down Suhin and his men. They also got the chance to say hello to an old friend at the show while they were at it.

All in all, not a bad day and Deeks went back to his bar where he found out his mom had given up on running a marathon. She had overextended herself as well.

The only one that didn’t go home was Callen and that’s because he’s been looking for Anna during his off-hours.