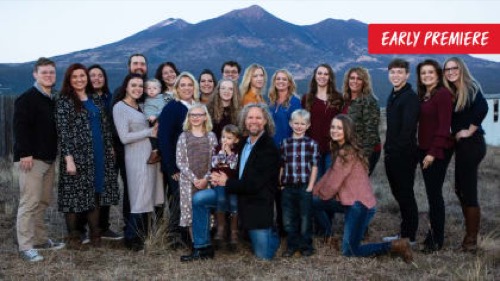 A lot has happened in the past two weeks. Both Meri and Robyn have put their houses on the market and so now all four homes are up for sale. It also wasn’t long before Robyn’s house sold. She was in contract with one family and the house is basically gone. It didn’t really seem fair to Janelle and Christine who both have houses still on the market. They were the first ones to do so. They even had to lower the prices on their homes because they haven’t received any interest in their homes and so things were still bad.

The family was still having financial problems. They haven’t broken ground on their new homes and so Kody was also trying to convince them that a one-family house would be perfect. He showed them the house at Christmas. His wives said at the time that it wasn’t the right time or place and so he was back now to show off this house. Kody put a lot of thought into it. He created this huge mansion that would give each wife her own space and her own kitchen. It was also soundproofed so that she wouldn’t hear what the other wives were doing.

Kody believed he created the perfect house. He has Janelle in his corner because she liked the one home idea and she felt it was imperative to their family structure. He also had older kids. They loved the one house idea because they remembered what it was like before and it would also save time for them now. They hated moving from one house to another. They didn’t feel connected as they normally did and so the older kids were siding with Kody. His one home idea was perfect and he has two wives against him.

Meri liked the one home idea. She said the cul-de-sac felt lonely after her only child left and so one home would help her feel like she was still a part of this family. Meri did see some of the downsides. She wasn’t as blind to them as Janelle and she wasn’t blind as Christine is. Christine only sees the negatives. She completely hates the idea of living in one family. She so rejected it that it made Meri feel like she was being rejected. And so this one home idea caused a great divide in the Brown family.

Robyn was another person in the middle. She had never lived in one house like the other wives and so she doesn’t know how she’ll feel or how her children will feel. She’s also concerned about the one entrance. If they do build, they’re only allowed one entrance and so that means everyone can see. They all see Kody going on a date with one of the wives. They might also be a witness to the fights he has with some other wife and so it comes down to monitoring Kody. He doesn’t like it. He doesn’t think he should be monitored and yet he is.

The adults eventually had to shelve the one home talks because it was going nowhere. They had other concerns like Valentine’s Day and how they handle it as a plural family. They chose to celebrate it with fondue. It was Robyn that gave them that idea because before she came they didn’t use to do anything. They would have ignored the holiday. Robyn was the one that said they could celebrate it together and they’ve been doing ever since. They all got flowers from Kody and this year Robyn started a new tradition.

Normally, the rule to their family is that Kody shouldn’t been openly affectionate with anyone. The wives set up that rules because they didn’t want to see that and so Robyn broke it. She openly hugged Kody. She then hugged everyone else and so she started a new rule. She started the hugging rule. Most of the wives didn’t mind and they were willing to consider getting rid of that rule, but not Meri. Meri didn’t want to see her husband openly affectionate with someone else and then be removed when he was with her.

The family also had another holiday they cherish. They had Kody’s birthday. He turned a big number and so they each gave him a gift. They also bought a family as well to give to him. Kody loves his birthday and this year he received a treat when his wives all wore t-shirts that said: “homes is where your wives are”. Kody had once claimed he had no sense of home because he didn’t marry a girl from home from his hometown. So, the shirts were poking fun at him and he loved them so much that he wanted one of his own.

His daughter Mariah also announced her engagement to her girlfriend Audrey. She proposed to Audrey at the Women’s March and Audrey said yes.