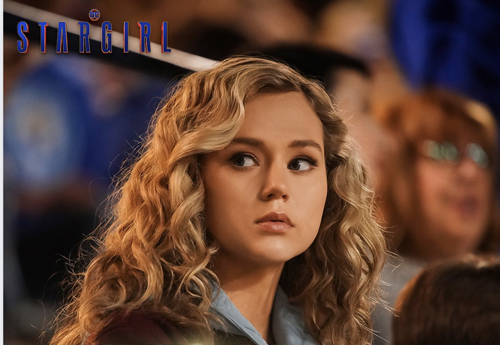 Tonight on the CW their new series Stargirl premieres with an all-new Tuesday, June 30, 2020, season 1 episode 7 and we have your Stargirl recap below. In tonight’s episode called, “Shiv Part One,”  season 1 episode 7 as per the CW synopsis, “As Pat teaches Courtney, Yolanda, Beth and Rick the importance of teamwork, the ISA converge to figure out who is trying to take them down.

Elsewhere, as the school prepares for homecoming, Cindy lashes out against her father’s strict rules, while Barbara accepts an offer from Jordan.”

Pat agrees to train Courtney and the others. They tell Barbara and Mikey he is helping with driver’s ed. Barbara seems a bit suspicious.

Cindy visits Henry at the hospital. He is visiting his dad. She brings a plant. She also wants to help plan their homecoming. He doesn’t care about homecoming. She understands.

At school, Courtney meets up with the gang. As they are walking down the hall, Cindy busts between them. They talk about how she used to be nice but since her mom died she has been horrible.

At work, Jordan offers Barbara and opportunity to go out of town to assess some real estate with him. She has to talk to Pat.

Cindy gets jealous of a friend who shares she is going to the dance. Henry won’t change his mind though. Cindy is mean to the janitor, knocking over his mop. Courtney helps him. The janitor heads to his closet. Inside is a jeweled sword.

Courtney and Cindy are forced to pair up in the lab while Henry is having issues in class while he tries to take a test. He can hear everyone’s thoughts and cannot concentrate. Meanwhile, Cindy is whizzing through the experiment without even looking. Courtney notices. Cindy shares that her dad is a chemist. They get along for the rest of the class. Cindy asks her to hang on Saturday. She says yes.

At home Cindy is mean to her mom, bullying her for wine and cheese. It seems she is afraid of Cindy’s dad. Cindy heads to see her dad in a locked-down basement where monsters growl in the dark.

Pat gives them a rundown on the enemies; Tigeress, The Fiddler, The Gambler, and more. Courtney is impatient and wants to get right out there. She ruins their team meeting and they all go home upset.

The Injustice League worries that Stargirl and the others will figure out who they are. Meanwhile, Cindy finds her dad and tells him she wants out. She is sick of being a teenager. It seems her father Dr. Ito needs her to date Henry to keep tabs on Brainwave. Cindy wants to sit at the table with the Injustice Society and she also wants to know who Stargirl is. He feels her to mind her business.

Barbara says goodbye to Pat and the family. She is headed out of town with her boss Jordan. Pat assures her they will all be fine.

Jordan’s son comes home. He wants to ask a certain girl to homecoming but he is nervous. His dad encourages him to, telling him all about his mother.

Pat, Mikey, and Courtney head to the homecoming game. Pat goes to get them hot dogs after he and Courtney share a few secrets. Mikey gets annoyed, telling Courtney that Pat is his dad. He is jealous and takes off. Cameron stops by and asks Courtney to homecoming. She agrees and asks Cindy if they can change their plans. Cindy gets annoyed. After, Courtney follows the principle into the school. She is taking about waking Brainwave up. She heads to her locker and gets her costume and staff, passing by the janitor.

Cindy heads home looking for her dad. She is mad. He isn’t there. She sees security footage with Stargirl. She puts on a uniform her dad told her to stay away from and heads to fight Stargirl. They battle in the hallway before fighting into the auditorium.

Cindy overpowers Courtney. The janitor saves her. Cindy runs off as Pat arrives. The janitor watches from the shadows, whispering Stripsey to himself when he sees Pat.