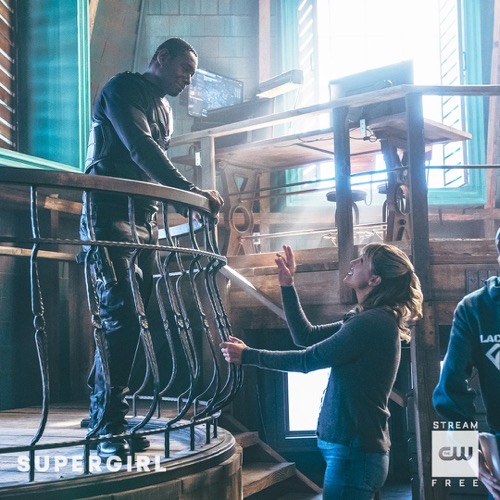 Tonight on the CW the series Supergirl airs with an all-new Sunday, May 3, 2020, season 5 episode 17 and we have your Supergirl recap below. In tonight’s episode called, “Deus Lex Machina”  season 5 episode 17 as per the CW synopsis, “Lex proceeds to lay an intricate plan to bring Lena closer to him, defeat Leviathan’s latest attack, and pit Supergirl and team against Leviathan. It is also revealed how Lex came into power after Crisis.”

An acolyte of Amy Sapphire has been found dead. It appears she had been kidnapping and killing people for weeks. Lex looks to have saved them and Supergirl doesn’t believe it.

Lex wakes from a dream where he is fighting Clark. He wakes to his butler. He finds out he did in fact save the world. He finds Lena sleeping at his home and injects her with an elixir to keep her sleeping. He heads to see his mother. He knows Supergirl will remote truth soon and he will have trouble. His mother thinks he has an obsession with Supergirl and the others. He needs to make Lena his ally.

Lex tries to talk Lena into being his ally. She calls him a narcissist and tells him about the Leviathan. That is who he needs to worry about. Lex goes in search of them and tracks down Eve first. She agrees to work with Lex. She won’t have to do any more dirty work. He will do it for her and protect her.

30 Days Post Crisis – Lex shows Eve how he is protecting her family. Eve shares that she has joined the Platinum Project. He tells her she is brilliant. Later, Lex tells Eve about his plan to get close to the Leviathan. He shows her a project he has been working on with mice. He blows one up in front of her and she freaks out. Lex is proud it worked using Q waves.

Lex tells Eve he has tracked down the man who killed her father. She needs to continue staying close to the Leviathan while he embarks on his world tour.

Alex tells Kara they found their dad, he is dead. Alex continues to play a superhero, taking out bad guys while Lex tours to promote Obsidian. Meanwhile, Lena comes to see Kara offer her sympathies. She offers Kara a book to help with her difficulties.

88 Days Post Crisis – Lex tells his mother that he is angry Lena apologized to Kara for her father. He is slipping. He wants to change his mission from the Leviathan to using a sun eater to turn Lena against Kara. His mother gets angry. He needs to focus.

A friend of Kara and Alex’s visits. He has been digging into Lex and Obsidian. Eve and Lex watch Kara and the others from a nearby rooftop. Lex goes right to the top obsidian to inform them of what Kara is up to. He tells her that she needs to create fear because she is running out of time to execute her plan.

Supergirl checks the warehouse of where she believes she will find VR users but it is empty. Meanwhile, Lex gives Brainy some information that runs to Supergirl. Lex heads to see Lena who discovers that Supergirl is using her technology. Lena is upset and Lex is thrilled.

Lena tracks down Supergirl and tells her to stop using myriad. Supergirl tells her it isn’t going to happen. Supergirl opens a door and a sun eater comes out. Brainy and the others realize what is happening. M’gann arrives to help with her ship. J’onn goes with her to stop the sun eater. They manage a victory. Lex heads to find Eve.

Present Day – Kara and the team arrive to find Lex at the warehouse. He pretends to be on her side. He told her about the leviathan. He leaves and meets with the top head of Obsidian. He tells her he had to pin the deaths on someone else. He tells her to gather everyone into VR but first, they need to kill Supergirl. She will do it. Lex is pleased.

Lex heads home to find Eve cooking. Eve professes her love. Lex tells her he could never love her back. In another world he loved her but that won’t happen again. He tells her she also killed Supergirl’s father and he will tell her if she doesn’t continue to help him.