BY Heather Hughes on February 29, 2020 | Comments: one comment
Related : Soap Opera, Spoiler, Television, The Bold and the Beautiful 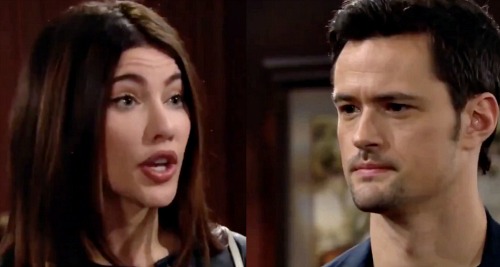 The Bold and the Beautiful (B&B) spoilers tease that Thomas Forrester (Matthew Atkinson) will stick to the plan. He’ll dig his heels in and hope his efforts to win back Hope Logan (Annika Noelle) pay off. Of course, Douglas Forrester’s (Henry Joseph Samiri) and Zoe Buckingham (Kiara Barnes) are a huge part of his manipulation. Thomas will use anyone he has to if it means nailing down a future with the woman he wants.

B&B fans can expect Steffy Forrester (Jacqueline MacInnes Wood) to finally wise up during the week of March 2-6. In a recent issue of Soap Opera Digest, Wood opened up about what she calls Steffy’s “wake-up call.” It’s time for Steffy to open her eyes to who Thomas really is, but Wood feels it’s going to be an awfully complicated situation for Steffy.

For starters, Wood acknowledged why Thomas pulled the wool over Steffy’s eyes somewhat. Steffy always had some concerns under the surface, but part of her truly hoped Thomas was on a better path. Since Steffy loves her brother, it was hard for her to face the facts.

“Steffy really wanted to believe he was a changed man,” Wood said. “There were reservations, of course, but she was really hoping he changed, even though in her gut, she had he doubts.”

Wood went on to talk about what a great manipulator Thomas is. She felt like Steffy got caught up in that whole kiss situation with Liam Spencer (Scott Clifton) because Thomas sucked her into stooping to his level.

In the week ahead, Steffy will overhear Thomas talking about that kiss – the one he made sure Hope witnessed with Steffy’s cooperation. Once Steffy listens in on this chat, she’ll be fully convinced Thomas is still obsessed. Steffy will rant about Thomas’ ultimate goal here, which is tormenting Douglas until it leads to a Hope wedding instead of one to Zoe.

Thomas will try to deny his continued Hope infatuation, but Steffy will worry about what the future holds. Wood suggested that “what Steffy has to deal with is that her brother is actually a bad guy. She’s going to have to deal with that, and that will not end here.”

It’s interesting that Wood is flat-out calling Thomas a bad guy. No mincing words! He’s a villain in her eyes. Wood’s also implying that things could grow darker. If things won’t end here, where will they end? Nowhere good from the sound of it!

The Bold and the Beautiful spoilers, updates and news say Thomas may have to sink even lower before he hopefully gets the help he needs.

Do you agree that Thomas is a true baddie? How low will Thomas go in the weeks ahead? Could he play a role in that shocking death that’s coming up? As other Bold and the Beautiful news emerges, be sure to check back often. We’ll have plenty of B&B updates to pass along. CDL’s your hotspot for great Bold and the Beautiful spoilers.