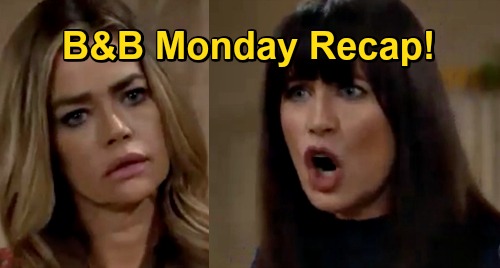 The Bold and the Beautiful spoilers recap for Monday, November 2, reveal that Brooke Forrester (Katherine Kelly Lang) and Ridge Forrester (Thorsten Kaye) enjoyed being back at their home together.

Just then, Bridget Forrester (Ashley Jones) called Brooke from the hospital to say that she was happy for Brooke and Ridge. Bridget couldn’t talk for long, but she said that she was grateful that Quinn and Shauna Fulton (Denise Richards) got caught and that hopefully Eric’s eyes were open now.

Ridge and Brooke went back to talking about Eric and Quinn, with Brooke bashing both Quinn and Shauna for their scheme. Ridge suggested that they just talk about themselves and their future from now on, and together he and Brooke decided to tackle their next big obstacle by going around it with smooth sailing.

Meanwhile, at the Forrester mansion, Quinn was visibly upset when Eric explained that Shauna was staying there. “You invited another woman to live in our home?” Quinn fumed.

Eric fired back that it was his home and that he’d invite whomever he liked. Shauna chimed in that it’s not what it looked like, and that she had returned to get her hairbrush. Quinn balked and started ranting.

Eric then barked at Quinn not to talk to Shauna like that and not to bully Shauna. “You’ve cost Shauna enough,” Eric said, “You used her to break up Ridge and Brooke.” Quinn told Eric not to play the “poor Shauna” routine since Shauna was all in on the scheme.

Quinn then said that she didn’t want to argue with Eric and that she wanted to come back home. Eric said that he didn’t see that happening anytime soon, and he asked Quinn to leave.

Shauna then asked for some time to talk with Quinn, and once Eric left the room, Quinn turned on Shauna and accused her of making a play for Eric. Shauna denied it, and Quinn grumped that she was Eric’s wife. “Who really disappointed him,” Shauna said.

Quinn fumed, listing all the things that Shauna had willingly done, and she said that her husband belonged with her, not Shauna.

Shauna said that she respected the fact that Eric was Quinn’s husband, and Quinn demanded that Shauna do everything in her power to get Eric to forgive her. “I’ve been trying,” Shauna said. Quinn told her to try harder because Shauna owed her.

Quinn said that this was HER home, HER husband, HER portrait on the wall, and HER life…not Shauna’s. “You cannot be in this house. You need to pack up your things and move out today!” Quinn demanded.

Over at Forrester Creations, Donna Logan (Jennifer Gareis) was working at her desk when Paris Buckingham (Diamond White) approached and asked to see Zoe Buckingham (Kiara Barnes). Soon, Zoe walked out of the CEO office and was happily overwhelmed to see Paris there. Paris and Zoe went into the office together.

Meanwhile, Eva (Kelly Kruger) came out of the design office and noted to Donna that they might want to put the Hope Spencer (Annika Noelle) mannequin up in the building, since people loved it so much in Paris. Donna thought that was a good idea.

In the CEO office, Paris and Zoe hugged, and Zoe said that she had missed Paris and asked why she was in Los Angeles. Paris, who’s a social worker, said that she had a coworker who was in the city helping with the homeless situation, and that she was going to pitch in.

Paris then wanted to talk about Reese Buckingham (Wayne Brady), and Zoe said that Paris deserved an explanation about her part in the whole Beth Spencer (River Davidson and Madeline Valdez) kidnapping. Paris understood, as she knew how their dad operated.

Paris wondered if Zoe had a special man in her life, and just then Carter Walton (Lawrence Saint-Victor) walked in to tell Zoe that the steam room was unoccupied.

Carter then saw Paris, and Zoe introduced her sister to Carter. Paris greeted Carter happily, then turned to Zoe and asked when Zoe was going to tell her about this gorgeous man in her life.

Be sure to stay tuned to the CBS soap tomorrow, so you don’t miss any of the action to come! Here at CDL, we’ll keep you posted on all the latest Bold and the Beautiful spoilers, news, and daily episode recaps. We’ve got you covered!