The Bold and the Beautiful Spoilers: Sally Catches Wyatt Cheating With Flo – Realizes ‘Wally’ Reunion Was a Lie?

BY hellodrdavis on March 8, 2020 | Comments: 4 comments
Related : Soap Opera, Spoiler, Television, The Bold and the Beautiful 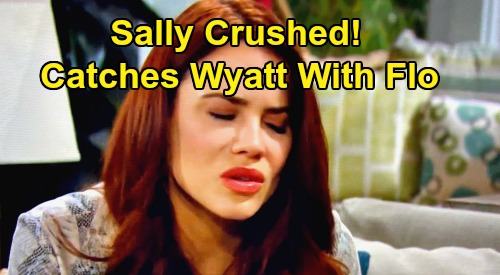 The Bold and the Beautiful (B&B) spoilers tease that Wyatt Spencer (Darin Brooks) could be in for an intense confrontation in the days to come. As B&B viewers know, he recently staged a reconciliation with Sally Spectra (Courtney Hope) after finding out that Sally had been diagnosed with a terminal illness.

Of course, Wyatt cares deeply for Sally and he wants to do everything that he can to make the final weeks of her life good ones, but he’s actually in love with Flo Fulton (Katrina Bowden). However, he and Flo have agreed to put their relationship on hold for the time being – for Sally’s sake.

Well, it looks like that’s going to get pretty difficult for Flo and Wyatt to do. It’s one thing to say that they can be apart for the better part of a month – which is about as long as Sally’s doctors projected that she had – and another thing to actually stay away from each other for a month.

Of course, Wyatt will want to keep up the ruse that he’s truly back with Sally, so when he and Flo see each other, it’s going to have to be in secret.

According to B&B spoilers, Wyatt will soon battle some pretty intense guilt as he’s maintaining a relationship with Sally but sneaking around behind her back to see Flo here and there.

Wyatt probably won’t have been expecting the whole ‘Wally’ situation to have an emotional toll on him – he likely just thought that he’d manage to stay away from Flo for a few weeks and it would be pretty simple. But Wyatt’s pull toward Flo will apparently still be pretty strong, and it looks like they’ll see each other on the sly.

Of course, that could lead to all sorts of problems. For one, it means that Wyatt will be cheating on Sally – or at least that’s sure how she’d see it if she found out about him sneaking around with Flo.

Sally’s a pretty sharp and perceptive person, and she’ll probably be able to tell that something is weighing on Wyatt. Of course, if she asks him what’s wrong, he’ll surely deny it. But an inquisitive Sally might go in search of answers on her own.

It’s certainly within the realm of possibility that Sally could catch Wyatt with Flo, and then things would really get intense. In fact, if Sally were to find Wyatt and Flo sneaking around together, it probably wouldn’t be long before she figured out exactly what was going on – that Wyatt was with her solely because she is terminally ill, and that he’d otherwise prefer to be with Flo…hence the cheating.

We’ll see what happens here, but something tells us that the whole staged reunion scenario is going to come back to bite Wyatt, especially since it seems that he’s going to continue to sneak around with Flo while he’s supposed to be reunited with Sally. It could turn into a real mess and fast, with Sally being the one to really get hurt as she realizes ‘Wally’ was a lie.

Do you think that Sally will realize that Wyatt is still seeing Flo behind her back? Stay tuned to the Bold and the Beautiful and be sure to check CDL often for the latest B&B news, updates, and spoilers.