The Bold and the Beautiful Spoilers: Wyatt Threatened As Sally and Thomas Reconnect – Old Flames Reunite?

BY hellodrdavis on March 10, 2019 | Comments: one comment
Related : Soap Opera, Spoiler, Television, The Bold and the Beautiful 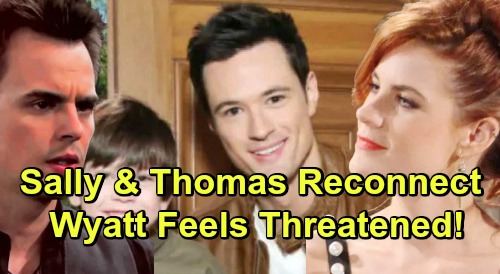 The Bold and the Beautiful spoilers tease that Wyatt Spencer (Darin Brooks) will get a big shock. He and Sally Spectra (Courtney Hope) have been enjoying their romance, and they’ve even got a new business venture at Spencer Publications together. Their romance seems pretty solid, but soon Sally will get a blast from the past that will directly affect her relationship with Wyatt.

According to B&B spoilers, Thomas Forrester (Matthew Atkinson) will come back onto the Los Angeles scene in a big way, along with his young son Douglas Forrester (Henry Joseph Samiri). Thomas and Douglas will enjoy reconnecting with his family and friends at home, and everyone will welcome them home with open arms.

But it looks like there will be some awkward moments, as Thomas comes face-to-face with Sally. Of course, Sally and Thomas have quite the history, as Thomas left Sally twice for Caroline Spencer (Linsey Godfrey). Sally probably won’t have great feelings as she reconnects with Thomas, and Thomas may want to take a moment to apologize to Sally for his past behavior.

Whatever happens, now that Thomas is back, he and Sally will have to find a way to coexist peacefully, so it looks like Sally will probably forgive him and the two will be on good terms again. But where will that leave Wyatt? Sally and Wyatt’s relationship is pretty strong, but Wyatt will still find himself worrying about Sally and Thomas.

Wyatt will probably be concerned that Sally may have some residual feelings for Thomas. That would be natural, since she spent a considerable amount of time with him. But knowing Wyatt, he’ll only feel threatened for a little while, until he talks the situation through with Sally. Plus, it really seems that Sally has put the Thomas chapter of her life behind her and is enjoying her fresh start with Wyatt.

Of course, all of this coincides with Wyatt’s reunion with Florence “Flo” Fulton (Katrina Bowden), his high school sweetheart. The two shared a steamy kiss before Wyatt informed Flo that he had a live-in girlfriend, and Flo may ultimately want more than friendship from Wyatt.

Is it possible that both Sally and Wyatt will be tempted by their respective exes? The thought might cross their minds, but it looks like Sally and Wyatt will remain on solid ground for the time being. Do you think that Thomas will ultimately threaten Wally’s relationship? Stay tuned to the CBS soap and don’t forget to check CDL often for the latest Bold and the Beautiful spoilers, updates, and news.