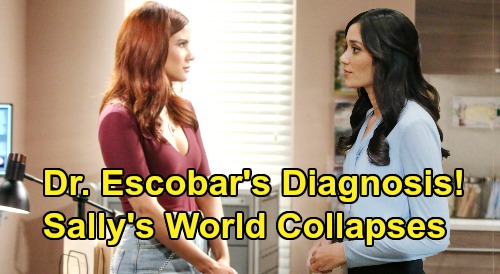 The Bold and the Beautiful (B&B) spoilers tease that Sally Spectra (Courtney Hope) will brace for some horrible news. She tried to tell herself that her recent symptoms were nothing, but she’s truly terrified deep down. Sally’s pretty in tune with her own body and mind. She can tell something may be seriously wrong, so she’ll dread her diagnosis in an upcoming episode.

Sally spoke with Dr. Pappas (Andreas Georgiou) about her shakiness, dizziness and frequent headaches. After running those tests he mentioned, Dr. Pappas will bring a trusted colleague into this. Monica Ruiz will debut as Dr. Escobar, who’ll be the one to deliver a devastating, life-changing diagnosis.

Of course, some fans may know Ruiz as “the Peloton girl” or “the Peloton wife.” Ruiz’s portrayal of the woman in a commercial for this exercise bike set social media on fire.

It was a polarizing ad that actually did her career some huge favors – like allowing her to land this short-term gig on The Bold and the Beautiful.

Ruiz happened to be a huge fan of B&B, so she jumped at the chance. In a recent issue of Soap Opera Digest, Ruiz opened up about how she started watching the show in high school. She was thrilled to score a role on it, especially a gripping one that let her work with some fantastic costars.

“It’s funny because I thought it was just going to be this little role where I’d be saying, ‘So-and-so is here to see you, Mr. Forrester,’” Ruiz admitted. “But I play a doctor in some very intense scenes with Courtney Hope [Sally] and Heather Tom [Katie], the most amazing actresses ever. I’m in these very dramatic scenes delivering some pretty bad news to Sally.”

Ruiz admitted that she tried to draw from real life experience with her own doctors for this role. She wanted to make sure Dr. Escobar was caring underneath all the overwhelming information she’ll be delivering.

What Dr. Escobar has to say will be tough for Sally to hear, but she’ll explain everything as best as she can. From there, they can discuss treatment options assuming that there are some.

Katie will also remain by Sally’s side through all this drama, so she’ll be glad to have someone in her corner. The Bold and the Beautiful spoilers say Sally’s diagnosis will turn her world upside down, so stay tuned.

We’ll give you updates as other B&B details emerge. Stick with the CBS soap and don’t forget to check CDL often for the latest Bold and the Beautiful spoilers, updates and news.