The Bold and the Beautiful Spoilers: Shemar Moore As Steffy’s New Man – Could Y&R Fan Favorite Return To Daytime?

BY hellodrdavis on July 5, 2020 | Comments: Leave Comments
Related : Soap Opera, Spoiler, Television, The Bold and the Beautiful, The Young and the Restless 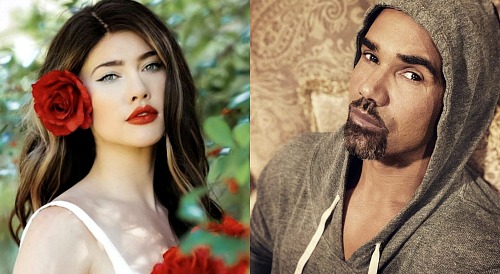 The Bold and the Beautiful (B&B) spoilers tease that Steffy Forrester (Jacqueline MacInnes Wood) will finally be getting a new man on the show. This is something that a lot of B&B fans have been wanting for a long time now, and there have been a lot of complaints about Steffy being stuck in an endless love triangle with Liam Spencer (Scott Clifton) and Hope Logan (Annika Noelle).

Well, according to B&B spoilers, the time has come, and executive producer Brad Bell has indicated that Steffy’s getting a new man.

This is great news, and there’s been a lot of speculation about who that man might be. It seems like it needs to be someone with a lot of strength and presence, since Steffy is certainly a strong woman.

It would need to be someone who can hold his own and feel secure knowing that Steffy will always have a connection with Liam in Kelly Spencer (Colette and Avalon Gray). And knowing how things in Steffy’s life go, this new guy might have to stand up to the likes of Bill Spencer (Don Diamont) at some point.

Well, we have an idea. What if TPTB brought back someone to daytime who could really shake things up on the Bold and the Beautiful and totally sweep Steffy off of her feet…someone like Shemar Moore?

Y&R viewers will remember that before Shemar did his stint on Criminal Minds and took on his current role on S.W.A.T., he portrayed fan favorite Malcolm Winters on Y&R.

Shemar was wildly popular on Y&R, and one wonders if he’d consider a return to daytime in a new role as Steffy’s new leading man. After all, primetime shows aren’t filming right now, and B&B has just started filming again as the first TV show back in production.

It isn’t too much of a stretch to think that Shemar might pop over to B&B for a stint as a strong new lead character that gets together with Steffy.

Fans are really anxious to see what happens when Steffy starts seeing someone new. Liam is going to have to deal with his ex being with someone new, and with that person being a permanent fixture in Kelly’s life.

It could turn into one of those situations where Liam doesn’t want Steffy, but he doesn’t want anyone else to be with her, either.

It could be a whole new world for Hope and Liam, who would have to deal with Liam’s jealousy over the new guy in Steffy’s life. And if the new guy were Shemar, then he’d certainly be capable of portraying a strong character who could totally hold his own with Steffy’s pushy family members like Ridge Forrester (Thorsten Kaye) and Thomas Forrester (Matthew Atkinson).

Thomas certainly wouldn’t get away with manipulating a Shemar Moore character in the way he’s manipulated Liam!