BY Heather Hughes on January 9, 2020 | Comments: one comment
Related : Soap Opera, Spoiler, Television, The Bold and the Beautiful 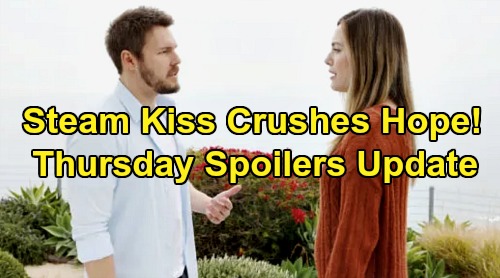 The Bold and the Beautiful (B&B) spoilers update for Thursday, January 9, teases that Thomas Forrester (Matthew Atkinson) will be a man on a mission! B&B fans know Thomas was furious over Liam Spencer’s (Scott Clifton) proposal stipulation. He has no intention of letting Liam cut him out of Hope Logan’s (Annika Noelle) life.

Thomas certainly doesn’t want Hope to back out of sharing custody of Douglas Forrester (Henry Joseph Samiri). He’s worried any progress he’s made toward a happy “Thope” family could be undone if Liam gets his way.

With that in mind, Thomas will cook up a new scheme. He’ll decide to manipulate Steffy Forrester (Jacqueline MacInnes Wood) into making her move with Liam.

That shouldn’t be too hard since Steffy’s pining for Liam. Thomas will give Steffy the nudge she needs and make sure Hope ends up at the cliff house. The Bold and the Beautiful spoilers say it won’t be long until Hope arrives and witnesses a “Steam” smooch.

Hope will be crushed when she spies Steffy kissing Liam, so she’ll get emotional and try to bolt.

B&B fans can expect a big confrontation outside as Liam chases after Hope and struggles to explain. Steffy will be scantily clad as she stands there and most likely makes matters worse!

There’s nothing Steffy could possibly say that would help at that point. Liam’s lips will have done the talking as far as Hope’s concerned. She’ll think Liam made it crystal clear where his heart lies by kissing Steffy back.

It looks like Ridge will ultimately admit that he is, but more Thomas trouble is brewing. The Bold and the Beautiful spoilers say Thomas will manage to fire up Brooke and Ridge’s conflict all over again.

Any “Bridge” reunion dreams will seemingly go up in smoke for now. It sounds like some hot drama’s on the way, so don’t miss all the action. We’ll give you updates as other B&B news comes in. Stay tuned to the CBS soap and don’t forget to check CDL often for the latest Bold and the Beautiful spoilers, updates and news.