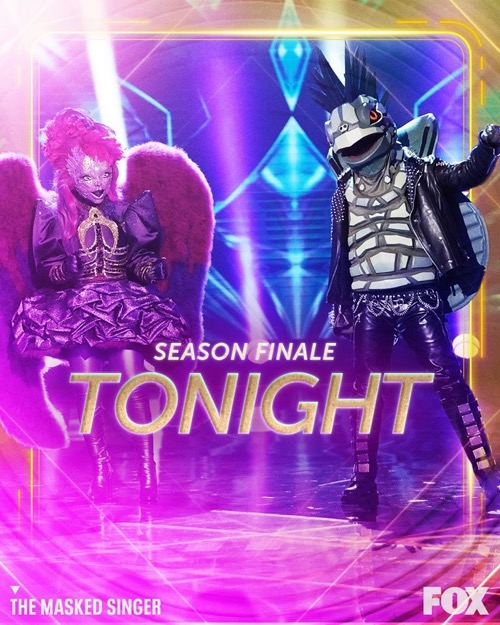 Tonight on FOX The Masked Singer airs with an all-new Wednesday, May 20, 2020, Season 3 Episode 22 finale and we have your The Masked Singer recap below. On tonight’s The Masked Singer season, 3 episodes 22 called “Couldn’t Mask for Anything More,” as per the FOX synopsis, “The three finalists compete for the golden mask trophy and, one-by-one, their identities will be revealed, including the winner.”

Tonight is the finale of The Masked Singer, the last three celebrities are Frog, Night Angel, and Turtle. At the end of the show, one of them will be crowned the winner of season 3.

Panel Comments: Robin Thicke: “That is going to be hard to beat. A lot of people don’t realize to be able to perform, sing, and dance; it’s actually more difficult when rapping. He is never out of breath, he nails his dance moves, he has an amazing voice that gives him power, swag, and empowerment – it makes us feel strong when we listen to him. That is what you create my man.” Jenny McCarthy: “I have been all over the place, actors who perform also, and then Lil Bow Wow is a good guess, but in today’s clue package there was the no limits clue, and that’s Little Romeo.”

Ken Jeong: “Could be but, there is an amazing rapper that I haven’t said all season, he has had some Twitter beefs with Kanye and Drake, and there have been some trolls in the clues, that made me think of Kid Cudi.” Nicole Scherzinger: “At first I thought it could be Omarion, but then in the clues, he said there were a lot of haters, he got bullied and trolled. I was thinking MC Hammer had a hard time with those hammer pants.”

Turtle performs “Before You Go,” by Lewis Capaldi.

Panel Comments: Nicole Scherzinger: “We have played around with a lot of different names. In the beginning, we saw a surfboard and something about acting, so I was thinking could this be Zac Efron? Then the more I listen to the voice I thought this could be Jesse McCartney. He delivered a clue to me saying we spent the morning together, but that’s because we did the Today Show together.” Ken Jeong: “Maybe, but to me with Mrs. Turtle of it all over the last couple of weeks, it seems like someone who is newly married and I can’t stop thinking about Nick Jonas.

Little known fact, I was a Jonas brother at one time, Ken Jonas – the slightly older, adopted brother.” Jenny McCarthy: “I don’t hate Ken’s guess for once, I can’t believe I just said that, just because of the just getting married thing. My previous guesses were Adam Lambert, Nick Carter – for now, I will say Nick Carter even though I like Ken’s guess better. Am I sick?”

Panel Comments: Nicole Scherzinger: “Last week I thought it was Keke Palmer, but Keke doesn’t have babies. I am going to go back to one of my old guesses, she said she built a lot of empires and hustled in the past, I think it is Taraji P Henson.” Jenny McCarthy: “I think it is a good guess, but there is someone I have been mentioning for the past few weeks which Kandi Burruss, there is a lot of Housewife of Atlanta clues.” Robin Thicke: “I agree with Jenny, this performance I really heard her signature bravado alone attuned to Kandi Burruss’ voice, so my gut leads me to Kandi Burruss.”

Time for the panel and the studio audience to choose their winner. The third-place winner of season 3 is the Frog. We are sorry to say goodbye to the Frog.

Panel Comments: Nicole Scherzinger: “You said this show reminded you of what your first love is, and that is when you shine the most. You inspire so many people out there, especially how you have gone through similar struggles like you. I am going to go with Lil Bow Wow.” Ken Jeong: “The first clue package of Olympics, I was thinking of Carl Lewis, I think now this is Kid Cudi.” Robin Thicke: “The only problem with that is that Ken always guesses incorrectly. There are so many clues that link to this talented man, it was the basketball clues, I think it is Lil Bow Wow.” Jenny McCarthy: “For me, there was an ice cube tray, so I thought O’ Shea Jackson Jr., Ice Cubes’ son, then Little Romeo kept popping up for me. And there were clues, my baby and no limits. So, I am going to go with Little Romeo.”

The frog is Lil Bow Wow.

More results, the runner up is Turtle.  The Turtle is Jesse McCartney

Panel Comments: Ken Jeong: “I just want to say that this has been emotionally tough, I really believe that vocally you are a winner, and amazing. Mrs. Turtle confirmed to me that this is Nick Jonas.” Nicole Scherzinger: “He said we spent the morning together, and I think it is Jesse McCartney, and he recently got engaged.” Robin Thicke: “There are a lot of idol clues, there have been some Queen clues, Adam Lambert is an incredible singer, I am going with Adam Lambert.” Jenny McCarthy: “The first time I saw you I thought maybe Nick Lachey, Nick Carter, then some clues came in head that matched this name, Jesse McCartney.”

The winner of The Masked Singer Season 3 is Night Angel.

Panel Comments: “Nicole Scherzinger: “I am still going with Taraji P Henson.” Ken Jeong: “I disagree, last time I thought it was Ciara, based on the clues from today, Tisha Cambell.” Jenny McCarthy: “That is not bad but the first clue we got was a picture of four Grandmas, Kandi Burruss.” Robin Thicke: “I agree with Jenny.”

The Night Angel is Kandi Burruss.