BY hellodrdavis on January 10, 2020 | Comments: one comment
Related : Soap Opera, Spoiler, Television, The Young and the Restless 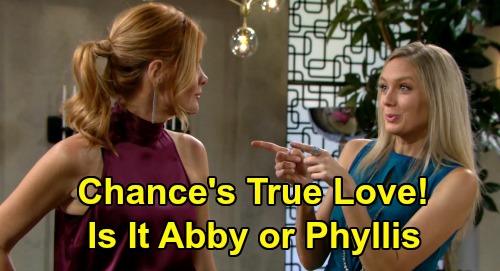 The Young and the Restless spoilers tease that Chance Chancellor (Donny Boaz) has recently emerged onto the Genoa City scene in a big way. As Y&R viewers will remember, he burst into the Grand Phoenix several weeks ago, decked Cane Ashby (Daniel Goddard), and then got caught up in the middle of the hostage drama with Simon Black (Jeffrey Vincent Parise). It was all pretty spectacular, but now Chance has decided to stay in town and put the danger of a law enforcement career behind him.

And that’s given him a chance to look for a little romance, which he seems to have found with Abby Newman (Melissa Ordway)…at least for now. The two have had their first date and their first kiss at this point, but we can’t help but wonder whether Chance and Abby have real potential as a couple.

They seem to get along well enough, and they’re having fun together, but as a general rule, Abby’s relationships tend to really go downhill after a while.

Nate Hastings (Sean Dominic) was a good case in point. Abby seemed to be really into him at first, but then the moment that Nate wanted to take her away for a weekend and do something “relationshipy,” Abby got cold feet and put the breaks on.

Abby seemed to sabotage the relationship early on, and then family issues got in the way when Victor Newman (Eric Braeden) faked his own death and she and Nate disagreed on that.

One wonders how long it will take Abby to start sabotaging her newfound relationship with Chance as well, but of course that assumes that Chance will want things to get more serious between them.

Chance seems to like Abby, but he recently told Jill Abbott (Jess Walton) that Abby was “fun” and that it wasn’t serious. Maybe Chance won’t want to have a lasting thing with Abby, and there’s another woman that he’ll turn to.

And that brings us to the other woman who is currently in Chance’s orbit: Phyllis Summers (Michelle Stafford). Now, as it currently stands, Chance can’t stand Phyllis, since she’s constantly needling him about what happened in Las Vegas with Adam Newman (Mark Grossman).

Phyllis really annoys him, since he knows that she’s not going to stop nagging him until she uncovers what happened.

But Chance doesn’t at all annoy Phyllis…in fact, she really seems to like him, in her own way. Phyllis recently told Summer Newman (Hunter King) that she wasn’t interested in anyone at the present time, but Y&R viewers know that she’s fascinated by Chance and that she has been since they worked together at the Grand Phoenix during the hostage situation.

And even though Chance is currently put off by Phyllis, that doesn’t mean that he doesn’t like her deep down. On soaps, sometimes characters who initially can’t stand each other or who have an antagonistic relationship end up becoming quite passionate toward each other, and we suspect that this could eventually be the case with Chance and Phyllis. Stranger things have certainly happened.

And really, Phyllis seems to be a better match for Chance than Abby is. Chance is a bold, strong character, and he needs a strong, forceful woman. That seems to describe Phyllis moreso than Abby.

Not that Abby is a weak character by any means. Abby certainly has her strengths, but Phyllis just seems like more of a formidable match for Chance.

Who do you think will ultimately end up with Chance? Abby or Phyllis? Stay tuned to the CBS soap and don’t forget to check CDL often for the latest Young and the Restless spoilers, updates, and news.