The Young and the Restless Spoilers: Devon & Elena Married With Children or Split Up By Lust For Amanda & Nate? 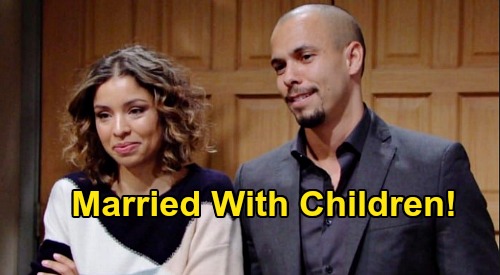 The Young and the Restless spoilers document that this fully endearing couple could set plans for marriage at almost any point after new episodes resume, potentially by August. But soap fans know that Devon Hamilton (Bryton James) and Elena Dawson (Brytni Sarpy) could also collapse, which would be a shame.

Whether Amanda is Hilary’s twin, or not, Devon doesn’t necessarily have to fuse his memories to modern times. Sure, Amanda reminds him of Hilary, visually. But she’s a completely different person, even if a genetic reveal confirms a link to Morgan’s previous character.

As for Nate, Elena has thought of him as a friend to-date. Sarpy’s alter ego is fully in love with Devon and is establishing what seems to be an ever deepening bond.

Odds would still favor Devon and Elena marrying and having children, rather than splitting.

Devon was literally haunted by memories of his deceased wife. Soap fans applauded Y&R’s brilliant move in having Morgan’s return to the cast be masked by Hilary’s ghost scenes. Fans didn’t initially know that was done in order to cloak the actor’s new role as Amanda.

One could assume that a few past teases at exploring Amanda’s backstory will lead to a full pursuit of the truth. She is known to be an orphan. So, it’s possible that Devon, Elena, and Nate all become part of Amanda’s search.

Devon would be instantly realized as Amanda’s brother-in-law if she proves out as Hilary identical twin sister. James’ character would also be the resource who could provide personal detail about Hilary, with emotional tie-in’s included.

The concept that Nick Newman (Joshua Morrow) and Devon developed is positive. They’ve created the New Hope health clinic in a developing area of the city that provides an easily accessible resource to residents that wouldn’t otherwise have it.

As of now, it’s only two staff members are volunteers. Elena and Nate already share a professional bond and a friendship. If Devon would grow closer to Amanda, assuming the identical twin reveal, Elena would need someone to confide in.

Hello, Nate and eventually goodbye to her relationship with Devon? It would be impossible to fully dismiss that daytime option.