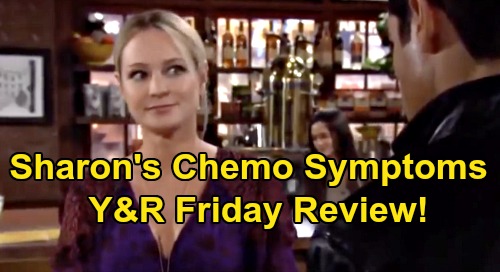 The Young and the Restless spoilers review for Friday, February 14, tease that Phyllis Summers (Michelle Stafford) will unexpectedly show up at Nick Newman’s (Joshua Morrow) place. Nick will comment that she’s supposed to be in Vegas, but she’ll say that she decided to stay in Genoa City for Summer Newman (Hunter King). They’ll discuss Summer’s newfound relationship with Kyle Abbott (Michael Mealor), which they’ll assume will end in disaster.

Talk will soon turn to Faith Newman (Alyvia Alyn Lind), whom Nick will say is struggling with Sharon Newman’s (Sharon Case) cancer diagnosis. Phyllis will listen to him and reassure him that Faith is reacting normally to a very scary situation, and that he’s a great dad and source of comfort for her.

Meanwhile, in Vegas, Chance Chancellor (Donny Boaz) will join Adam Newman (Mark Grossman) at a bar. They’ll bicker, with Adam not wanting Chance to stick around, but Chance will insist on staying. A waitress will slyly plant a listening device on a chair at their table, then text Phyllis to say that it’s done.

Riza Thompson (Tina Casciani) will then arrive, and after some small talk, she’ll report that the woman has been asking questions and doesn’t believe that her husband is in witness protection. Riza will say that the woman doesn’t care about the man – she just wants all the money he stashed before he disappeared.

Adam then said he was electronically transferring funds, and that Riza knew what to do, and to make all of this go away. Riza took off, and Chance noted that Adam stopped him from being killed in the line of duty. Adam said that he never imagined that “he would come at me like that” and that nobody would see it that way, least of all the people that Chance worked for.

Finally, Adam said it was his problem and he’d make it go away. And back in Genoa City, Phyllis heard the whole exchange. Now Phyllis is sitting on some truly explosive information and she certainly has what she needs in order to blackmail Adam now. We’ll see just how long it takes her to go to Adam with her demands.

Meanwhile, on the new episode of Y&R on Friday, February 14, Rey Rosales (Jordi Vilasuso) will hover around Sharon at Crimson Lights, but she’ll be feeling ok, with no side-effects from the chemo yet. Nick will soon join them to do his share of hovering, which Sharon will joke about. Sharon will take off, and the men will broach the uncomfortable subject of Kyle and Summer.

Turns out, they’ll be on the same page, each thinking that Kyle’s the bad guy and that Lola Abbott (Sasha Calle) and Summer are the victims in this. Nick will say that he doesn’t approve of Summer’s decision, but that she won’t listen to him. Rey will understand. They’ll talk about Sharon as well, with Nick offering to be there for Rey if he ever needs to talk about what he’s going through with Sharon.

Later, Rey will return home to find Sharon nearly doubled over with nausea. He’ll get her breathing, and soon the nausea will pass. She’ll explain that it just hit her all of the sudden, but she’ll say that she feels better now and that it was like a wave that was pulling her under. Still, she’ll say that it wasn’t as bad as she expected, and that she can do this.

At Jabot, Summer and Kyle will canoodle in the office and talk about their future until Jack Abbott (Peter Bergman) appears and catches them kissing on the couch. “So much for taking my advice,” he’ll below when he walks in. He’ll urge Kyle and Summer to take things slowly, but they’ll insist that they aren’t rushing anything, since they’ve known each other their entire lives.

They’ll make a big pitch to Jack about how this very moment has been in the making since the day they met. Jack will be very skeptical, pointing out Kyle’s actions in the past year – marrying Summer to get part of her liver for Lola, divorcing her, marrying Lola, now divorcing Lola and taking back up with Summer again. Still, Summer and Kyle will insist that they know what they’re doing.

Jack will warn them to be ready to other people’ reactions. He’ll caution that people would judge Kyle harshly, but that they had his support. He’ll urge them to learn from their mistakes and to be good to each other. Finally, Summer and Kyle will leave the office together, with Jack looking very concerned as they go.

It looks like we’re in for a great episode of the Young and the Restless on Friday! Be sure to stay tuned to the CBS soap and check back with CDL for all your latest soap news and spoilers.