BY Heather Hughes on February 18, 2020 | Comments: one comment
Related : Soap Opera, Spoiler, Television, The Young and the Restless 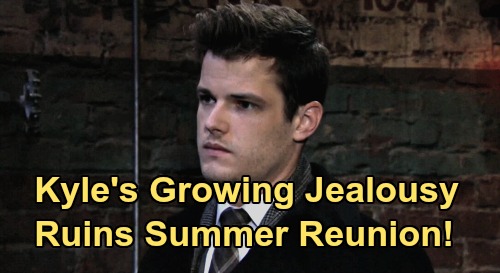 The Young and the Restless (Y&R) spoilers tease that Kyle Abbott (Michael Mealor) will eventually face another reality check. His feelings for Summer Newman (Hunter King) eventually became too much to bear, so he was forced to admit that she was in both his head and his heart. That led to the destruction of Kyle and Lola Rosales’ (Sasha Calle) marriage, so they’ve all been trying to move forward.

Lola’s been very mature about the whole situation, which has impressed both Kyle and Summer. Kyle wasted no time in reuniting with his ex, but Lola’s handling it pretty well all things considered. She could’ve been throwing down in major catfights with Summer, which honestly would’ve been awfully entertaining!

However, that’s not really who Lola is, so she’s taking the high road. The question is: Will Kyle be able to do the same? Summer pointed out that Kyle should be prepared to watch Lola move on.

Kyle seems to think he’s ready for that. He feels like if he’s happy with Summer, then Lola should be able to find her happiness, too.

Of course, saying he wants Lola to be happy is one thing. Watching her fall in love again is quite another. The Young and the Restless spoilers, updates and news point to some looming obstacles for “Skyle.”

Kyle could find himself feeling jealous as Lola and Theo Vanderway (Tyler Johnson) inch closer. They’ll most likely become an official item at some point, so how will Kyle react to that?

Kyle might argue that he’s simply trying to protect Lola from more heartbreak, but Summer may worry that it’s something more. After all, most people don’t just turn off their feelings completely after a breakup. Kyle admitted that what he had with Lola was real; it just wasn’t forever.

Once the newness of Kyle’s reunion with Summer wears off and Lola’s heart heals with Theo, “Skyle” could easily face problems. Summer has faced repeated warnings, especially from Nick Newman (Joshua Morrow).

He doesn’t want to see Summer get her heart broken again. Jack Abbott (Peter Bergman) has also expressed concern about Summer and Kyle rushing into things.

Y&R writers have laid the groundwork for trouble down the road, so it’s possible that’ll be due to Lola’s new romance. Even if Kyle still wants Summer, he may find that he doesn’t want Lola with anyone else.

That’s obviously not reasonable, but Kyle could certainly feel that way. It’s the kind of thing that could put Summer’s protective shield back up. She may worry Kyle isn’t all in on their relationship.