The Young and the Restless Spoilers: Lily Better Off Without Cane – ‘Lane’ Was Toxic, New Love Blooms At Last 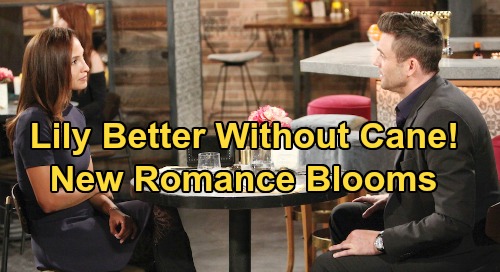 The Young and the Restless (Y&R) spoilers reveal that Lily Winters (Christel Khalil) faced some challenging times, but she fought her way back and is now thriving in Genoa City again. Cane Ashby (Daniel Goddard) was desperate for a reunion and held out hope for quite a while. However, Lily was determined to focus on a new path, which has worked out well so far.

Lily has proven that she’s truly better off with Cane. They were together for years, but the pairing itself limited Y&R on stories. Lily was stuck in a “Lane” rut and Y&R seemingly wasn’t offering her any way out.

It sometimes felt like Lily was just Cane’s wife and the Ashby twins’ mom. Lily wasn’t her own person, but that’s changed thanks to her fresh start.

Now that Lily’s free from Cane, she can focus on who she is and what she wants. Lily faced horrible guilt when she caused the car accident that claimed Hilary Hamilton’s (Mishael Morgan) life.

Y&R fans know Lily recently alluded to her inner demons – and we saw her tackle those. Inner demons are tough to conquer completely, but Lily’s still managed to do it for the most part.

That’s no thanks to Cane, who couldn’t resist kissing Victoria Newman (Amelia Heinle) while his wife was struggling behind bars. Of course, that was on top of Cane’s previous hookup with Juliet Allen (Laur Allen), which led to her pregnancy.

Lily made mistakes of her own, but she tried to learn from them and grow. Cane couldn’t seem to stop his pattern of destructive, selfish behavior.

By splitting up Lily and Cane, The Young and the Restless has given Lily plenty of new romantic opportunities. That’s great news since Christel Khalil lights up the screen with just about anybody.

Khalil is a fantastic actress who can bring a lot of chemistry to the table. She certainly works well with Jason Thompson (Billy Abbott), so Lily and Billy could be on the verge of some sizzle.

Lily would also make a good match for Nick Newman (Joshua Morrow) once his reunion with Phyllis Summers (Michelle Stafford) crashes and burns. There are other Genoa City hunks that Lily could be paired up with, too.

Lily has a ton of options when it comes to stories and pairings, so she really is better off without Cane. He was holding Lily back and weighing her down. The Young and the Restless spoilers say Lily’s future is bright, so love could bloom along with this new career she’s building.

We’ll deliver updates as other Y&R details emerge. “Lane’s” destruction may be the best thing that’s ever happened to Lily! CDL’s your hotspot for exciting Young and the Restless spoilers, updates and news.