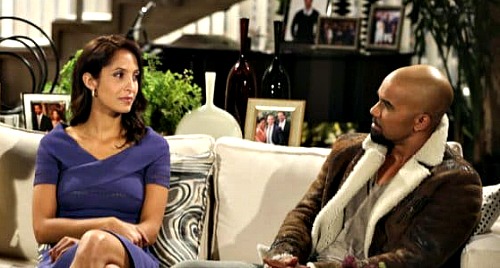 The Young and the Restless spoilers document that Lily Winters (Christel Khalil) has been alone in Genoa City, Wisconsin, since returning early this year. Her acceptance of Jill Abbott’s (Jess Walton) business offer enabled Khalil’s character to be written back into the show.

Y&R fans recall that Khalil voluntarily dropped to recurring status more than a year ago in order to spend more time with her family. It was just last summer that Lily needed the support of her biological father, Malcolm Winters (Shemar Moore), following the unexpected shock of Neil Winters’ (Kristoff St. John) passing.

Now, after a series of classic episodes featured numerous milestone moments in the Winters’ family history, fans are wondering when Moore will again reprise the role that first made him famous in the mid 1990’s.

Lily is single and her children are no longer living in GC. While she has friends, a situation could arise where Malcolm’s specific presence is needed.

Young And The Restless Spoilers – Lily and Cane Unlikely To Revive

Daniel Goddard (Cane Ashby) and his many fans were shocked last fall when Y&R announced that his tenure on the show was ending. Cane was written out as part of an arc involving Devon Hamilton’s (Bryton James) inheritance being stolen by Colin Atkinson (Tristan Rogers).

Goddard’s character was last seen promising to track down his father. A subsequent phone call, where Cane was mentioned but not seen, or heard, followed. It’s unknown whether Cane, or Lily is caring for Sam Ashby (a child’s role not known to be currently cast), who is Cane’s son through Juliet Helton (Laur Allen).

Lily and Cane were having marital issues before the above played out. Lily’s prison sentence, due to the accidental death of Hilary Hamilton (Mishael Morgan) and her unborn child, led to Billy Abbott (Jason Thompson) driving to the prison where Lily was being held and telling her that Cane kissed Vickie Newman (Amelia Heinle).

Lily and Cane’s divorce last year was the couple’s second ending. They previously divorced in the early 2010’s, before remarrying shortly thereafter.

Charlie Ashby (Noah Alexander Gerry) and Mattie Ashby (Lexie Stevenson) were written out of the show when Lily was sent to prison. The twins were said to have been living with their mother after her release, which is when she was working as a mentor for inmates who were transitioning back to society following the end of their sentences. Charlie and Mattie are now said to be in college.

So, the Ashby family, which had long been Lily’s base of support, is no longer based in GC.

Young And The Restless Spoilers – Malcolm Winters Cares About His Child, Lily Winters

Moore’s return to Y&R last year allowed Malcolm to deliver a powerful eulogy at his brother’s funeral. Fans knew the he and all of the actors who were in those scenes were speaking as their characters and as themselves.

Raw emotions on both sides of the screen allowed the cast, crew, and audience to bid farewell to Neil and to St. John through behind the scenes interview shows as well.

A recent classic episode from the mid 2000’s focuses on Lily learning that Malcolm is her biological father. Khalil’s character last saw the man, who she long thought was her uncle, during the period when Neil’s funeral was held.

Many believable scenarios could be created that spark a need for Malcolm’s return. Lily could be hospitalized due to an illness, or injury. Alternatively, she could reach out to Malcolm as part of a project that Chancellor Industries media division is pursuing.

With however it may happen, Shemar Moore’s return to the cast, likely to be only temporary again due to his other career efforts, would be welcomed.