The Young and the Restless Spoilers: Thursday, February 27 Recap – Victoria Awakens, Tells Billy to Get Away from Her – Abby’s Hotel Curse 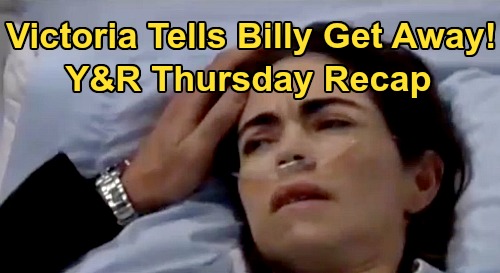 Chloe will have some encouragement to pass along. She’ll know how much Billy wishes he could take Victoria’s pain away. At the hospital, Nikki Newman (Melody Thomas Scott) will speak to a still comatose Victoria. She’ll push her daughter to wake up before leaving the room. Y&R spoilers say that’ll give Billy a chance to sneak in again.

Billy will battle more guilt over Victoria’s ordeal. He’ll never forgive himself and needs Victoria to pull through this. After Billy tells Victoria he loves her, she’ll finally open her eyes. Victoria will stare for a moment before insisting Billy should get away from her. Once Nikki returns, she’ll comfort Victoria and give Billy a dirty look.

At Society, Nate Hastings (Sean Dominic) will gab with Elena Dawson (Brytni Sarpy) about the new clinic. They’ll also discuss how much they appreciate their friendship before the conversation shifts to Devon Hamilton (Bryton James). Since Colin Atkinson (Tristan Rogers) still hasn’t been located, Elena will worry that Devon feels like he let Katherine Chancellor (Jeanne Cooper) down.

At the Grand Phoenix, Abby Newman (Melissa Ordway) will gripe to Chance Chancellor (Donny Boaz) about Phyllis Summers (Michelle Stafford). She’ll feel confident Phyllis set that lawsuit in motion. Abby will think it’s outrageous for Phyllis to do something like this when Victoria’s in the hospital.

Meanwhile, Devon will get a strange text containing a string of numbers. It’ll be from an unknown caller, but Devon will immediately suspect Colin’s behind this. After Devon calls Chance and fills him in, Chance will join him at the coffeehouse. They’ll eventually get a nearby Kevin Fisher (Greg Rikaart) involved in cracking the text message code.

Once Kevin does some typing on his laptop, he’ll confirm that it’s for an offshore bank account in Devon’s name. Kevin will marvel at the balance: a whopping $2.475 billion. Another text will come in that also seems to be from Colin. Devon won’t understand why Colin is now giving his fortune back, but Kevin won’t think he should care as long as he’s got it.

Afterward, Devon will make his way to the Chancellor mansion with Chance and Kevin. They’ll speak with Jill Abbott (Jess Walton), who also received a text from Colin. He confessed that his travels aren’t the same without Jill and is hoping she can get Chance off his back. Once Jill learns Colin returned the money, she’ll insist that she still won’t forgive him.

Kevin will assure Devon that he can transfer his fortune right away and is available for other projects. Devon will let Kevin know he’ll be paid handsomely for his trouble. As for Chance, he’ll be taken aback by Devon’s decision. Since the culprit is now broke and alone, Devon will think Colin’s suffered enough and will push Chance to just let him go.

Once Devon’s gone, Kevin will point out that he thought Devon would be happier. He’ll leave the room with Chloe, so Jill will chat with Chance. They’ll discuss Jill’s previous involvement with Colin, and Jill will admit he made her feel alive. A little later, Jill will receive a special delivery. She’ll open up a box with a ribbon and find a red rose inside.

After Devon finds Elena and Nate at Society, he’ll give them updates on Colin giving back his fortune. They’ll naturally be ecstatic over the news. Once he’s alone with Elena, Devon will admit Colin’s last text struck a chord with him. It was about how money can make you crazy, but Elena will insist that never happened to Devon. Nevertheless, Devon will think he has to be smarter about who he helps and how.

At the hospital again, Victoria will be examined by Nate. After Billy joins Nikki outside Victoria’s room, they’ll bicker about whether he should stay. Billy will fear that Victoria thinks he did this to her. Nikki will insist that Billy needs therapy or a meeting. She won’t want him around Victoria and will think he’s in denial about his issues.

Once Nate reappears, he’ll summon Nikki for Victoria – who wants her mom and answers about what happened. Nikki will rush to Victoria’s side and promise Billy won’t be coming around again. The Young and the Restless spoilers say Nikki will just want Victoria to concentrate on her recovery.

Back with Abby, she’ll learn another lawsuit has been filed. Abby will be even more convinced that Phyllis is responsible. The Young and the Restless spoilers say Abby will complain to her lawyer over the phone about trying harder. Once Abby hangs up, she’ll determine that the hotel is cursed.

It sounds like an action-packed Y&R episode’s coming up. Don’t miss all our hot Young and the Restless spoilers, updates, news and recaps here at CDL.