The Young and the Restless Spoilers: Victoria Driven to Drink, Lonely in CEO Chair – Nikki Sees Warning Signs of Alcoholism?

BY Heather Hughes on May 9, 2020 | Comments: Leave Comments
Related : Soap Opera, Spoiler, Television, The Young and the Restless 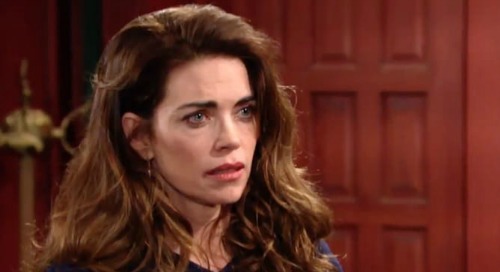 Of course, we can kind of understand both sides here. Victor is Adam’s dad and just wanted to protect him. He didn’t want Adam to have to deal with the trauma of killing AJ Montalvo when he was just a boy. It’s easy to see why Victoria’s attitude and actions would bother Victor.

However, it was ruthless of Adam to steal the CEO spot from Victoria after everything she’d been through. If Adam would be that cruel to his sister, why shouldn’t Victoria be cruel right back? Victoria suggested she could live with losing Victor’s respect and seemed content to reclaim the throne.

Unfortunately, Victoria might find that it’s pretty lonely at the top. Y&R fans know Victoria decided to cut Billy Abbott (Jason Thompson) out of her life. Victoria just can’t deal with Billy anymore, so they’re strictly coparents at this point.

As far as other love interest options on canvas go, there aren’t many for Victoria right now.

Victoria may throw herself into work again, but that’s already proven to be a stressful, exhausting job. Victor’s probably not going to be giving out much praise or approval either. Adam’s life will be blowing up over this AJ secret, so Victor’s attention will be on his son.

Victor should remain miffed with Victoria for taunting Adam, which led to Victor revealing the big secret. Since Victor was hoping to handle this without bringing Adam in the loop, he may be harder on Victoria at Newman. The tension might bring disagreements on deals and other problems that arise.

So let’s consider what we’ve got here. Victoria will get a taste of what it’s like to be the black sheep – at least in Victor’s eyes. Her job will probably leave her overworked and fed up.

At night, Victoria will have to wrangle up the kids and go to sleep alone. There’ll be no one to vent to or hold her close. It sounds like Victoria could end up living a sad and miserable life by soap standards.

Victoria might drown her sorrows, which could easily lead to her becoming an alcoholic. This story seems like a no-brainer since Nikki Newman (Melody Thomas Scott) faced her own battle with alcoholism. Victoria could hit the bottle too hard and start spinning out, which would naturally leave her mother concerned. Nikki would see all the warning signs.

This seems like the perfect way to keep Victoria busy until a love interest is freed up. If The Young and the Restless writers decide to do “Villy” again, this could even serve as a strategy to bring them back together. It’s looking like that CEO seat won’t matter as much as Victoria thought it did. Victoria might be driven to drink in her time of misery.

Do you think Victoria could become an alcoholic? This would certainly bring some gripping material for Amelia Heinle! Whatever happens, Y&R viewers will be eager to see what’s in store once production resumes.