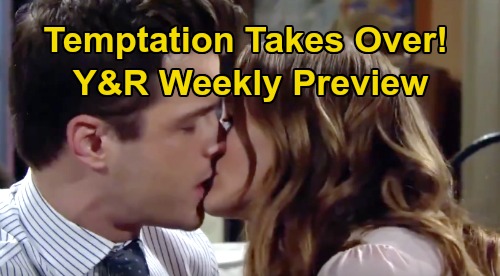 The Young and the Restless (Y&R) spoilers for the week of January 20-24 tease that lines will be crossed and battles will erupt. For starters, Phyllis Summers (Michelle Stafford) will try to ruin “Chance” Chancellor’s (Donny Boaz) blooming relationship with Abby Newman (Melissa Ordway). Chance and Abby aren’t too serious yet, so Phyllis will think she’d better derail this before it goes any further.

Phyllis will even pull the fire alarm at the Grand Phoenix as part of her plot. She’ll make sure Chance and Abby are forced to call it a night before things turn too steamy. Later, Phyllis will approach Chance and suggest they should enjoy a fun night of their own. Chance will narrow his eyes at Phyllis and look amused. He’ll wonder if Phyllis is asking him out on a date, so she may admit it sounds good to her.

Phyllis is definitely working an angle here, but there must be some genuine attraction under the surface. Abby will assure Phyllis she’s not worried, but is that really true? Y&R fans can expect Abby to open up to Mariah Copeland (Camryn Grimes) later. Abby will confess that she’s been seeing Chance, but Phyllis is also interested in him.

Although Abby might keep up the confidence act, everyone in town knows how crafty Phyllis can be. Mariah might warn Abby that she can’t be too careful as far as Phyllis is concerned. It turns out Mariah will also butt in some other romantic drama. She should appreciate the distraction since she’s fretting over Sharon Newman’s (Sharon Case) cancer diagnosis.

Mariah will realize Theo Vanderway (Tyler Johnson) is blatantly hitting on Kyle Abbott’s (Michael Mealor) wife. She’ll blast Theo for it, but Theo won’t be backing off Lola Abbott (Sasha Calle) anytime soon. As for Kyle, he’ll deck Theo for going on and on about how amazing Lola is. Kyle won’t think it’s appropriate, so he’ll punch Theo to the floor and launch a major fight with Lola in the process.

Lola will confess that Theo has a thing for her, but she’ll feel like Kyle’s blowing this out of proportion. She won’t see how this is different from the bond between Kyle and Summer Newman (Hunter King). Kyle will think the difference is Theo’s manipulating Lola – and Lola’s doing nothing to stop it.

All this will leave Kyle’s marriage in turmoil as he heads off on a business trip with Summer. They’ll win big thanks to a successful deal, so they’ll follow it up with drinks from the mini bar. In one of their suites, Summer will assure Kyle that she’s put Theo in the rearview mirror. She’ll wonder if Kyle’s as happily married as he once thought, which he’ll struggle to answer.

Here’s where the story gets a bit tricky. The Young and the Restless spoilers clearly indicate that Kyle will pull Summer into a kiss. However, Y&R’s weekly preview video shows Summer seemingly initiating it. Perhaps Kyle will plant the first one and pull away before Summer goes in for another.

Toward the end of the promo, Summer tells Kyle she just wants him to be happy. Of course, Summer would prefer if Kyle were happy with her instead! The Young and the Restless spoilers say some hot drama’s looming, so stay tuned. We’ll give you updates as other Y&R news comes in. Stick with the CBS soap and don’t forget to check CDL often for the latest Young and the Restless spoilers, updates and news.