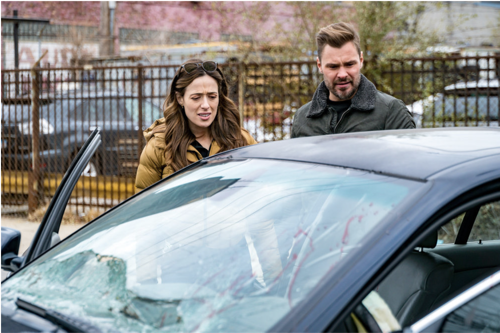 Tonight on NBC their drama Chicago PD returns with an all-new Wednesday, February 3, 2021, season 8 episode 5 called, “In Your Care,” and we have your Chicago PD recap below. In tonight’s Chicago PD season 8 episode 5 as per the NBC synopsis, “The team investigates a rash of car jackings and finds that the truth is more complicated than they realize. Burgess makes a discovery about a previous case that will change her life forever.”

In tonight’s episode Ruzek and Burgess are finished their day, they sit down to continue watching a movie. He spills his beer on the carpet, says he is sorry, but he hates the rug anyway, he prefers his rug. She asks him if he is going to clean it up or clean it. He says pretend, then he grabs her close and hugs her. They start kissing and she says they don’t they know better than this, but they don’t stop.

Then, we see Ruzek and Burgess walking on the street getting coffee, he tells her that they can try sleeping together on the regular rather than every six months, he says it is called dating. She says she thinks he knows what she wants now. She wants a proposal, marriage and babies, the whole thing. They get a call and respond to a car accident, a woman is distresss, and a man is full of blood, delirious and falls out of his BMW.

They take him to the hospital, he is still unconscious. Burgess says it looks like he was beaten inside the car, then maybe they dragged him out and beaten him more. Then they get a call about a maybe related incident, two blocks south of them. Halstead and Upton go talk to the witness, he says he was working and he heard screaming, three men had ski masks, they were running like heck, one had a crow bar – they sped away in a grey SUV, he could tell they were kids like teenagers. Then he saw the blue BMW.

At the station Ruzek says the victim didn’t have any drugs or alcohol in him, they are betting on a failed car jacking, he was driving a ninety thousand dollar car. Burgess got a hit on the offenders car, she ran the car through their stolen vehicles. Jessica Ramirez reported a similar grey SUV stolen two months ago. Jessica works at a DCFS center with kids aging out of the system, teenagers.

Ruzek and Burgess go to visit Jessica, she says her SUV was stolen from the lot out back, anyone has access to it. Ruzek tells her they looking into a pretty brutal car jacking by teenagers and they used her SUV. She said her spare keys were missing, they were in her drawer. She knows the kids who had access, they are thirteen teenagers. They are walking out of the facility when Machayla sees Burgess and runs to her. Burgess tells Machayla she find out what is going on, why she is there and take care of everything.

A call comes in about a car jacking. Upton and Halstead are close by and see it, Halstead runs after one guy and Upton sees a bunch of other guys beating up someone . Burgess and Ruzek arrive, they start running after the group that was beating up the man, Upton takes care of the victim and calls it in. Voight arrives on the scene, Upton tells him the victim was taken to the hospital, he had signs of a massive heart attack. The kids that were fleeing were three boys and one girl. Atwater is there, he says it is weird to go through all this for a wallet.

Burgess tells Halstead that Cathy missed some school pickup, so the teacher had to call DCFS. Now Cathy and Machayla are back together and DCFS is offering her more support.

The two victims are concious, Jeff and Troy, but they are refusing police help, they don’t want to talk. They found the SUV, there is two thousand in cash, six wallets with the ID’s in them, the car is loaded with stuff, looks like the kids were living in them. They found out that the kids are prostitutes and they are robbing their Johns, that is why the victims don’t want to talk. Voight says they just took their car and their cash, they got to know the heat is on them; let’s find these kids before they become more desperate.

Burgess and Ruzek leave the station, she says the kids, the case, the prostitution makes her think of when they lost the baby. She says it is almost like they are closer because of that, and that is not real. He says sometimes trauma brings people closer, why is it not real.

They stop on one corner and ask a man to look at some of the pictures they have of the kids at DCFS, the guy recognizes one guy and says he is around the corner, he is usually there smoking. Burgess is the first to eye him, she calls Ruzek to where she see him and he starts running. Burgess is running, trying to catch up with the guy. She catches up to him by a fence with barbed wire, there is no where for him to go.

At the station, Burgess reads the information she has on the guy, his name is Miguel Raez, he is eighteen and removed out of home at seven because of abuse, he spent the last decade in and out of group homes, no family, he is on his own.

Voight and Burgess go in to speak to Miguel. He tells him that he knows that he is involved in a string of robberies. Burgess tells him that he can spend decades in jail, the best thing to do is to cooperate. Voight tells him that if he talks, he can help. Miguel says he has been helped by people like him his whole life, he doesn’t need anymore help. He is not saying he did anything, but they are not his friends, they are his family. And even if he knew something, he wouldn’t tell either of them. Atwater says they have nothing on him, just circumstancial. Burgess says they should release him, he will go back to them, he said they are his family. Voight agrees and tells them to keep eyes on him.

Ruzek tells Burgess they lost Miguel. She tells him that she thinks she made a big mistake, when Ruzek notices Miguel. They get out of the car and Migeul has blood all over him, he asks them to help him. He leads them to a car, there is blood everywhere, then he goes into a building, a woman is on the ground with head trauma. The girl was on a job and the guy beat her, her name is Lilly.

Burgess tells Upton and Halstead that the girl is in surgery and it doesn’t look good. They start looking around the building, Burgess finds a book that belonged to Lilly. Upton finds two ID’s of the other kids, Samuel Wilson and Michael Jeffries. Burgess finds a gun.

They got a call to an who is dead, it is the guy who beat Lilly and he was beaten up pretty badly. Miguel is back in the station with Voight and Burgess. Miguel says they robbed the men and beat them, Voight says all he has is a kid to that brutualy robs people. Voight says he is already going in for the robberies, but he is a good kid who played it wrong and he doesn’t want him to spend four decades in prison. Miguel asks if his friends will have a chance, Burgess says no. It will be a lot harder later to claim self defense. Miguel says there is a chance they could get away, no, he is not saying anything.

The other two guys have no family, no connections, they have been from foster home to foster home for a decade. Voight says to charge Miguel. Burgess says they are kids, this is the best they can do for them. Voight tells her if she has a better play then let him know about it. Burgess gets a call from DCFS, Cathy filed a complaint about Burgess. Cathy is dealing with mental issues, she is telling them it is not best for either of them. For right now, Machayla would have to go to a group home. Burgess offers to take Machayla home and she is told that it is not a good idea, she is white and a cop, Machayla needs someone who is committed to her.

At the station, Upton says they found a vehicle that did another car jacking, but they find nothing. Ruzek says they have probably already crossed state lines. Burges is looking through Lilly’s book, then she goes to see Miguel and tells him that he is going to be transported to county. Then she shows him Lilly’s book, she tells him that if his friends crossed state line they can’t help them.

He says they are in Iowa. Atwater tells her that he is sorry they can’t solve every case and save every kid. She tells him that a couple of months after she lost the baby, she looked up that kid that they saved in the hotel room. She thought it would make her feel something. She called her mom, she hadn’t seen her daughter in months, she ran away. Then she asks him what he thinks if she took in Machayla. He says she is going to be up against a lot. But, if she loves her, she will be good.

Burgess goes to speak to Ruzek before she leaves the station. She says Cathy gave up her parental rights and she is taking in Machayla. He asks if it will be a temporary basis, she says for now, but it could be permanent. He asks her if she even thought about what this looks like. She says she feels something for Machayla and she knows it might change what they have. He says he will always be in her life, that is not going to change, he is just worried this is a reaction that she doesn’t want to see another kid lost.

Burgess meets Machayla, she tells her they could be a family and take care of each other, she says yes and smiles.