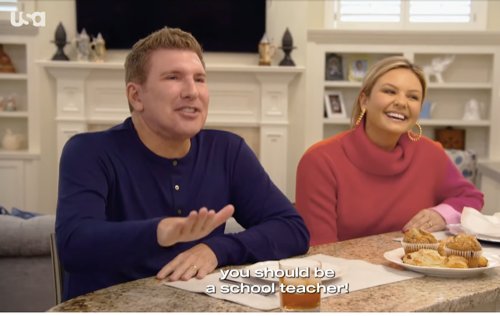 In tonight’s Chrisley Knows Best episode, Chloe has a YouTube channel. She films herself trying out makeup swatches and her grandfather/surrogate father asked to join her one day. He thought he would be great. He soon tried to take over and so Chloe put him in his place. She said she was the star of the channel. Chloe like everyone else knows that Todd could be dramatic and that’s why it wasn’t surprising a few days later when Todd complained about Julie’s snoring. She’s been snoring for years. He learned to live it and so everyone asked why he was complaining now. He said the snoring is worst in the new house. It could be the high ceilings. It could make the snoring echo more. Todd really doesn’t care about the reason because all he wants is for the snoring to stop.

The snoring was so bad one night that Todd couldn’t sleep. He asked his wife to turn on her side and that didn’t help. He next used their bed adjustor to lift Julie’s side of the bed but then she woke up and she complained she couldn’t sleep upright like that. She told him to use his earplugs. Todd complained about his earplugs. He said that they hurt his ears and he also added why should he be uncomfortable when its Julie that has the problem. It got so bad that Todd gave up on going to sleep. He instead turned on the television and watched some tv. Which in turn bothered Julie who was trying to sleep. Julie said she’s had to deal with Todd’s snoring as well as the smells she had to get used to.

One of their arguments about it was said in front of Todd’s mother. She was the one who pointed out to Todd that he farts and Todd denies it of course. Todd later came up with a new way to handle Julie’s snoring. He created a suite in the house just for Julie. She would have her own room and she wouldn’t keep him up at night with her snoring. Julie said she wasn’t going to sleep there. She wants to sleep in their bedroom like she has for the past twenty-five years and she was threatening Todd that if he makes her sleep in the other room then he was going to be sleeping alone for longer than he thought. Julie went to sleep in the other room. She hated it. She kept getting up on the wrong side of the bed. And all the while Todd loved it.

Todd has been getting the best sleep of his life. Todd was happy and Julie was furious. They argue about it all the time and the kids were picking up on it. Chase and Savannah asked Grayson what’s going on. He told them their parents were sleeping in separate rooms. Something they saw as the beginning of the end. The older kids were worried that their parents might be thinking about divorce and so they decided to do something about it. Chase and Savannah held an intervention. Their intervention was all over the place and it took a while for their parents to realize what they were talking about but they understood and they assured their kids that they weren’t getting a divorce.

They did on the other hand have to deal with Faye. Faye got into a turf war with a twelve-year-old. She started out by delivering people’s groceries and so the kid in the neighborhood got the idea from her to do the same. He didn’t reveal his age on his flyers. Just his name. Faye took it as competition and she badmouths him for weeks. It got so bad that Mikey’s mother went to Faye and asked the older woman to be nicer to her son. That was the moment Faye saw Mike and realized he was a little boy. She stopped badmouthing him. She even started to wear a t-shirt hyping his new business and so Faye made things right. But it is funny that she got into a turf war with a child. What’s next? Girls Scouts.

Julie later got a mask to help her sleep and it should also help with snoring. So, she and Todd are back to sleeping in the same bed again.