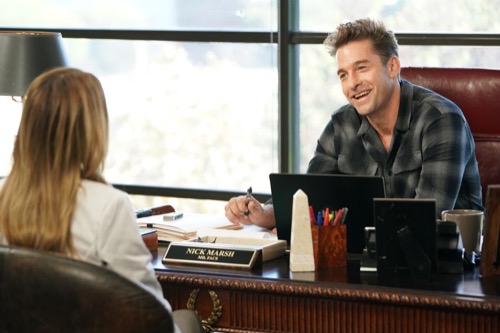 Owen was personally affected. It reminded him of his day in the military and he enlisted civilians in his coordination to the explosion. Owen wasn’t himself afterward. He snapped at everyone. He even snapped at Teddy and the two are strong a couple. She was overseas herself in the military. She didn’t respond to the explosion as bad or Owen and his sister. His sister was so freaked out that she stationed herself in the OR during her son’s heart operation and she refused to leave. She couldn’t be away from him after she feared a bomb had gone off.

Owen was so freaked out that he asked everyone to come in. He had all hands on deck but it wasn’t necessary because either people died or they were mostly transferred to the hospital closer to the area. The hospital only treated firefighters that were injured in the incident. There was even a fatality. Firefighter Miller was dead and for one brief moment, Bailey had worried it was Ben.

She was married to a firefighter and she was worried about him. She didn’t feel at ease again until Ben arrived at the hospital safe to escort his late friend. Miller died from his injuries from being involved in the second explosion. He left behind one daughter, a sister, two parents, and many friends. And it turns out Ben had agreed to take in Miller’s daughter.

The two men had gone overboard a ship together. They got to talking and Miller asked Ben to take in his daughter. Ben never told his wife this and so they were figuring out if they should take her in as everyone was being informed of Miller’s death. The hospital was also still dealing with Owen and Owen’s PTSD. He got PTSD the moment he looked at a firefighter that needed surgery.

He began freaking out and it was Jo who found him in that state. She tried to ask him if he was okay. He told her that he killed “him” and then he ran off when she asked who. Owen’s time overseas was troubling himself and he seemed on a breaking point but he didn’t want to tell anyone or talk about it with his wife.

Teddy also couldn’t sit on him. Owen was a grown man and she was a doctor at a hospital. She had to work. Teddy was in fact treating Vic because Vic went into heart failure. Although, it was unclear if this happened before she was told about Miller or after because Ben and Bailey were discussing Miller’s daughter. Miller had asked Ben to be his daughter’s guardian twice.

He agreed both times without ever discussing it with his wife and his only excuse was that he never thought Miller would die. Miller was a young man. He was younger than the both of them and in spite of the dangerous job – it still never crossed Ben’s mind that Miller might die. Miller is dead and now everyone has to figure out who gets his daughter.

Vic was probably the best because she lived with Miller. But she was in no condition to take on a child because she was electrocuted and she needs to be monitored for heart failure. Teddy revived her. Vic woke up and it was confirmed to her that Miller died. She broke down crying and so aside from the health issues she also was in no place emotionally to take care of anyone.

Vic also wasn’t asked by Miller to take care of his daughter. Miller asked Ben because he wanted his daughter to finally have two parents and there were no better people for that job to act as a unit than there were Ben and Bailey. They discussed it. Bailey has always wanted a little girl and she wants to be there to support little Pru.

Only she couldn’t do it. Bailey was afraid that Pru’s grandparents would fight for her and that they would get her because they are the child’s blood relatives. They’re also in her life. She grew up being taken care of by her grandmother. Her grandparents are also wealthy and they would fight for Pru. Especially after they lost their only son. Bailey told Ben she refuses to love a child she felt for sure would be taken away and so Ben didn’t know what to do. Bailey couldn’t be reasoned with in her state. The rest of the firefighters meanwhile were in mourning and Schmitt was there to cheer up Montgomery. Andy also brought Miller’s daughter to the hospital. And that’s all it took because one look was enough for Bailey to instantly be in love with her.

The explosion affected many of them. Meghan later broke down in tears after her son’s surgery was finished and Hayes was there for her. He comforted her. The two have become friends and there seemed a possibility for more but for now, he was just being supportive and she welcomed him. Hayes also told Owen that his sister needed him and so both he and Teddy were there to comfort her. It also helped take Owen’s mind off of his own issues.

Meredith and Amelia brought in Koracick to help with their research and he agreed but David Hamilton hated the idea because Koracick slept with his daughter and bragged about it. They had to deal with the huge temper tantrum he threw. Amelia stayed late at the lab. She also flirted with the other woman they were working with. And Meredith meanwhile kissed someone.