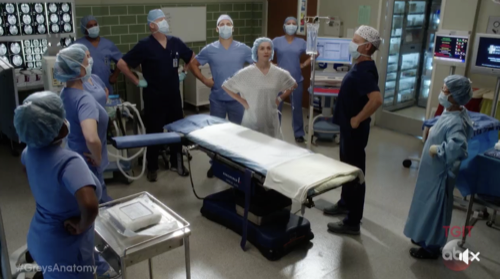 Amelia is buzzing some of her hair off in the bathroom mirror. Bailey wakes up in an empty bed. The team meets in Amelia’s room to discuss her surgery to remove the tumor. After the showboat surgeon Thomas leaves, Amelia doles out responsibilities if she dies. Everyone reassures her she won’t. She tells them all she loves them tremendously.

Amelia and the team of surgeons stand in their special pose in the room while Meredith and the others watching from the viewing room.

Richard and Bailey are walking. Their first round of interns is here. They spot one, talking to himself.

April is in the church chapel praying and chanting – please don’t make me have to unplug her. In the studio they are listening to the Beach Boys while DeLuca asks a million questions. The surgeon is forced to cut a vessel that leads through the brain.
It is 11 hours post-op. Amelia hears them all talk to her and she answers back but they don’t hear her.

Meredith wakes up after sleeping in a chair all night next to Amelia. She wakes up and touches Amelia. She thinks she squeezed her hand.

Jackson returns. Alex asks him how much money he was left. Meredith tells him he is rude.

DeLuca is trying to get Amelia out of bed. Amelia is crying. Thomas comes in. He asks DeLuca what he thinks he is doing. DeLuca tells him that Amelia made him promise he would do it.

Meredith meets with Meghan. She just wants to see her kids. She only has a low grade fever.

Richard speaks to Amelia. He tells her that she needs to follow the doctor’s orders.

Amelia wakes up. She is talking…French! The whole team is confused.

Richard and Bailey continue looking but only come across angry go-getters or obsessed snap chat users.

Meghan gets up and pulls all of her tubes out. Her child needs help and she needs to leave. Owen tries to talk sense into her. Meredith comes in. She tells her how she kidnapped her own daughter. She knows how this feels but she will only make it worse.
April is lying on a bed. She doesn’t want to go home. She doesn’t have Harriett tonight.

Meredith is working next to Amelia’s bed. Owen comes in. He asks her if things will be all right. Amelia tells him to keep it down in English. They both jump with surprise and rush to her bedside. She tells them to call Derek and tell him.

They bring Amelia in for a scan. She is panicking. Thomas tells her to calm down she will be a surgeon again. Nathan calls Meredith again. She finally answers. He has an official with him looking for medical information.

Richard brings Maggie home. Jackson is there visiting Catherine. The whole thing is uncomfortable for the 4 of them. Catherine is in the kitchen telling Richard she was going to speak with Jackson alone tonight. In the living room, Jackson offers Maggie wine. She could use some.

Thomas checks Amelia. He clears her to go home. She wants to see her scans. There is something wrong.

Wilson asks Meredith to take her name off of her article so that her psychopath husband won’t find her and kill her. Meanwhile, Meredith is waiting for Nathan to call back.

Amelia looks at her scans while Thomas tells her she is fine. DeLuca stays with her as she asks to see certain scans again.

Meredith gets a text from Nathan. She heads to the airport. She demands the officials let her see her patient. They do.

Meredith comes in to see Meghan. She has a surprise for her. She has brought her son Forouk. Meghan is beside herself excited.

DeLuca brings Amelia something. It is what she is missing, it is her tumor. She thinks about it and looks relieved.

Jackson stops in to see Maggie. He tells her that he appreciates she being at dinner last night.

Owen comes in to see Amelia getting ready to leave. She is going to her sisters. Owen was going to leave her when she told him she was sick. Now he can be free. He tells her that he married her and made vows, in sickness and in health. Amelia goes home with him.