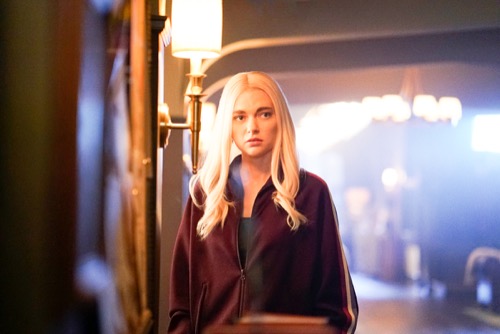 Tonight on the CW their new supernatural series Legacies air with an all-new Thursday, February 11, 2021 episode and we have your Legacies recap below.  On tonight’s Legacies season, 3 episode 4 called, “Hold On Tight,”as per the CW synopsis, “The Super Squad bands together after the Necromancer’s next move unleashes more than anyone bargained for; a run-in with Ethan reminds Josie why she doesn’t trust herself with magic.”

In tonight’s episode, Landon brings Hope pancakes in bed. It is their anniversary. He has more plans for them. She shares she does too. If he is ready. He gets giddy after he realizes what she means.

At Mystic Falls High, Jo sees the necromancer as he kills the principal. She runs home to find Rick. Just after she tells him they see a zombie dragonfly across the sky. Meanwhile, MG tries to get Alyssa to stop working with the necromancer. She isn’t willing to stop, slashing MG for this blood.

Rick makes a speech to the school about the necromancer. They are all in. They head to the school. Rick hands out weapons as the monsters make their way out of the front doors. Meanwhile, Hope and Landon fight about who will go into the school now that there is a barrier spell stopping her but Landon is human.

Lizzie gives Jo the coin she has placed all of her powers in. She needs Jo to fight with them, especially now that MG is with Alyssa. Meanwhile, MG tries to understand Alyssa and make her realize what she is doing is wrong. Just when he is getting somewhere he doubles over in pain. Jo comes in with Lizzie and knocks Alyssa unconscious.

Landon finds the necromancer. He unleashes a monster on Landon before leaving the room. MG tells Jo and Lizzie how Alyssa knows the spell and can help rewrite it all.

As Landon looks at the monster, he realizes it is his dad. He talks in circles trying to figure out what the Necro is up to. Outside, Rick and the others fight. Landon heads out to find the necromancer. He does on the football field but is quickly turned to ash when the zombie dragonflies by spewing fire. Hope sees the whole thing and is too late. She drops to her knees.

After the necromancer taunts her she gets up and beheads him. He won’t die but it makes her feel better. Landon comes from behind her. She cannot believe he has risen again.

Inside, Rick cannot find any of the monsters and after a flash of light, he has determined that Landon, Hope, and all of the monsters have been sent to prison. Meanwhile, Hope and Landon realize they are in fact in another world. Hope has an idea.

MG comes to. He sees Alyssa, Jo, and Lizzie all working together. MG feels better. The three created another world and sent all of the spells there. After a group hug, they head back.

Landon and Hope head through the portal. They arrive on the other side. Before heading to see the others they share a dance in celebration of their anniversary. After, they decide to go through with what they have been waiting to do in the candlelight.

Rick and the sheriff share a drink. He decides he isn’t going to compel her after all of this. She can decide if they maintain their relationship.

MG is hiding out with the ascendent instead of enjoying the party. Alyssa finds him. They decide they want to give one another a shot. Lizzie walks in and gets upset. She heads to see Jo. She will be ok, she tells Jo. Jo shares that she has put her magic away and wants to go to Mystic Falls. Meanwhile, Landon turns to black and disappears right in front of Hope.