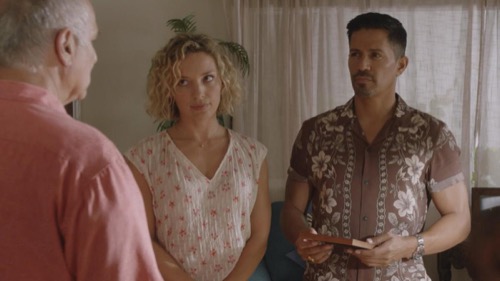 Tonight on CBS their reboot of the classic series Magnum P.I. airs with an all-new Friday, October 8, 2021, episode and we have your Magnum P.I. recap below. On tonight’s Magnum P.I. season 4 episode 2 “The Harder they Fall,” as per the CBS synopsis, “While Magnum and Higgins reunite and work the case of a construction worker’s tragic death, TC and Shammy get skyjacked by a pair of drug runners posing as tourists.”

Higgins is back. She took some time off to focus on herself and that landed her into a contract with MI6. But she’s back now. She’s back on the island and her first day back was an adventure. Magnum picked her up. He told her about an outstanding warrant against a guy who jumped bail and so her ride from the airport ended up leading to a car chase. It was also all for nothing. The authorities got their guy and they couldn’t get the reward money for turning him in. Another aspect of having Higgins back is that she notices things that the others didn’t. She noticed that Magnum started locking his door. He also started using scented candles. He’s in a new relationship. He hasn’t told anyone because he and his girlfriend are keeping things quiet due to their working relationship and it’s been going on for weeks.

Magnum’s friends all missed the signs. They didn’t notice anything strange about his recent behavior and so Higgins will probably be the first to figure it out. She was already coming close when she and Magnum received their first case since she’s been back. They were contacted by a recent widow. Her husband died on a construction site. The widow was told that her husband committed several mistakes and that’s how he died and she thought that was suspicious because her husband became paranoid about their safety after they learned they were pregnant. The widow thinks people at the site are covering what really happened to her husband. She asked Magnum and Higgins to investigate. They went to the construction site. They spoke with the Makoa Brown’s bosses and it turns out there was a lot the widow hadn’t told them.

Her late husband had a record. He was an ex-con and he recently failed a drug test. The results of the drug test weren’t revealed until after Makoa died. If his boss had known he wasn’t testing clean, Makoa would never have been allowed to work the day he died. Magnum and Higgins talked to their detective friend about Makoa. They wanted to know why he went to jail and they learned oh so much more than they planned on. Not only was Makoa an ex-con but he was also a murderer. HPD had evidence that Makoa murdered a young man and they were forced to let him walk because a chain of custody situation meant key evidence was thrown out. Makoa walked on a murder charge that everyone knew he committed. Makoa, therefore, had enemies and so his widow might be right that his death wasn’t an accident.

Someone probably did kill him. Someone attached to his victims probably went out for revenge and there was no way to prove it. Security cameras at the site had been disabled. Makoa died in a closed-off area with no witnesses and so he was either he was really unlucky or his widow had been right to think someone murdered him. Makoa also had a restraining order against the father of the man he killed because the guy stalked him. Higgins and Magnum visited the father. He had a convenient alibi for the night in question. Almost as if he made sure to be as far away as possible and so the two private investigators started to look into him. They figured if he didn’t do it himself then he must have hired someone. The construction company was known to hire ex-cons because of the tax right off.

Odds are that Makoa wasn’t the only murderer on the payroll. They were investigating and Rick was busy missing Suzy. Suzy was a mixologist at his bar. She was also technically an ex because they hooked up right before she left the island to join an artist community and so Rick was missing her. he was also missing her concoctions because it was hard to come up with new drinks by himself. But with both Magnum and Rick being preoccupied, no one noticed that TC was running late. TC did a helicopter tour with Shammy and they were skyjacked. Their “tourists” pulled guns on them and forced them to land on one of the smaller islands. The tourists proved to be drug dealers. They went looking for one of their shipments on the island and they split up.

One went with TC. The other stayed behind with Shammy. The two worked individually to take down one of the drug dealers and they both accomplished the job. Shammy flew the helicopter to get help. He arrived back with emergency services and it was just in time because TC was shot. He had needed a medical evac. TC was being treated as Magnum and Higgins handed over what they found to their detective friends. It turns out Makoa wasn’t a killer. He ran with a gang and he tried to leave. One of them tried to get revenge by framing for murder. Makoa never killed that man’s son and that man ended up agreeing to a “Strangers On A Train” scenario in order to kill Makoa for something he didn’t do. And the shooter was Makoa’s boss who went out of his way to hire Makoa in exchange for him having someone killed himself.

With the boss being involved, that’s how there’s no security footage of what happened. He turned off the cameras before he committed the murder and so the widow was right about her husband. He was a good guy.

And Higgins also figured out that Magnum has a girlfriend and she knew it was Detective Kaleo, but she agreed not to say anything because she knew they were being discreet.