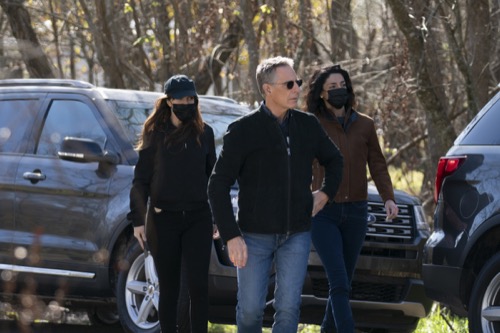 In tonight’s NCIS Nola Navy Commander Claire Hogan’s daughter disappeared. The fifteen year old disappeared out on her morning jog through the park and it was routine for her. The teenager runs that path every morning. She had even taken a call from her good friend when she disappeared and it was her cell phone that was found at the scene. It was just her cell phone that was left behind. The young girl was gone and there was no traces of a struggle or even an accident.

There was no blood. Her clothes weren’t found and so odds are she was either taken or she left voluntarily. Beth Hogan is a teenager. Her mother was about to leave for deployment for the next six months and Beth would have had to stay with her father. Her father Frank Hogan is a radical survivalist. He believes that one day all society will collapse and that he and his family had to prepare for the day they’ll fight for food.

Beth and her older sister Simone hated staying with their father. They believe he was crazy and neither of them would want anything to do with them if the choice was up to them, but the choice wasn’t up to them. Beth was a minor and she has to go stay with her father for the next six months. Her father basically demands it. He could have let the girl stay with a friend or even with her adult sister and instead he demanded his rights. He wanted Beth to stay with him.

He uses these opportunities to train her for the day the government collapses and so Beth knew how to take care of herself. She was trained to put up a fight. There would have been evidence of this at the scene and so the team came to suspect that Frank may have taken his daughter. Maybe Frank wanted to start her recent bout of training early.

The team went to visit Frank at his property outside of town. He had just returned from a hunting trip and he still had his gun on him and so he tried shooting at people he felt were trespassing. The team had to show him their credentials before he put down his weapon. Then, once they informed him about the problem, Frank came to believe that his ex-wife was responsible for his daughter’s disappearance.

He thought that Beth had been corrupted by the city and even later, when he learned that his daughter had been abducted, he still found a way to blame his ex-wife. He said that his daughters should have stayed with him. They both would have been safer growing up out of the city. He was so self-righteous that Pride had to step in. Pride reminded both parents that their focus should be rescuing Beth.

Beth was last seen gagged in the back of a SUV. The SUV was registered to a private military company and the man who runs the place said that plenty of his agents had access to his accounts. Although, he did mention that he fired someone recently for taking too many risks in the field. He gave the name to NCIS and they looked into this Joel Cadiff. They also looked into human traffickers.

Beth was a young white girl and she could be sold into sexual slavery. The team went looking for the car that took her. It led them to a crash site on the bridge and they found a body still in the car. It wasn’t Beth, but it was one of her captors and there was evidence that she was taken from the car by two other men and so the team needed all the help they could get in following the footprints. And they received help from Beth’s father Frank.

Frank was an excellent tracker. He also refused to go back to the station and so he convinced Carter into accepting his help. The two men went after Beth. They followed the footprints while Sebastian checked the crash car. The body that was found was Joel Cadiff. He apparently knew Beth’s mother Claire because they both worked in Japan at one time and they had become friends.

Sebastian also checked the car for fingerprints. He was able to identify the two men that ran off with Beth. The men were Alex and Matt Dixon. They were brothers and they were also in private security. The brothers both had a history of violence and the two were even accused of murder at one time. Beth was with some very dangerous the man. The team had to find out why they took her and if she was truly in danger.

With everything they learned about Cadiff, the team came to suspect they were dealing with a custody issue. They thought Beth’s mother had arranged for her to be kidnapped and the truth is that it was her sister who arranged everything. Simone was traumatized with growing up with a dad like Frank. She hadn’t wanted the same for her sister and Cadiff told her that the only way they could protect Beth was to kidnap her. Then things changed. Cadiff died and it was just his men now that had Beth. Beth was truly kidnapped.

Her captors even called Simone and they demanded a hundred grand or they said something was going to happen to Beth. And so in trying to save her sister, she risked her sister’s life and killed her boyfriend and now she has to come up with money she doesn’t have.

The team was thankfully able to step in. They provided the money for the ransom and the team went with Simone to get her sister back, but it was a trap. The Dixon brothers weren’t going to hand over Beth. One of them was hiding with her in a separate location and the other came to collect the money on his own. Pride and his team were forced to shoot the guy who collected the money.

They killed him and so the team’s best bet in finding Beth was Carter and Frank. The two men follow the tracks till they found Beth and her captor. And by working together, they were able to kill the last Dixon brother and finally rescue Beth.

Beth was later reunited with her parents. She also saw her sister, but she wasn’t ready to forgive her sister just yet and so Simone had a lot of making up to do.