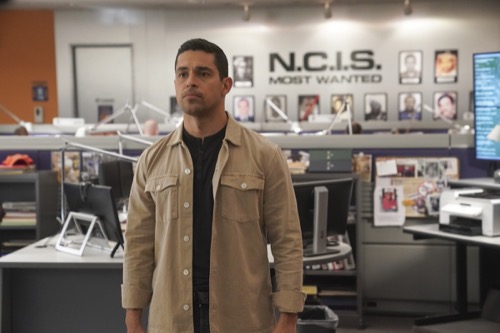 Tonight on CBS NCIS returns with an all-new Tuesday, May 18, 2021, season 18 episode 15 called, “Blown Away” and we have your weekly NCIS recap below. On tonight’s NCIS season 18 episode 15, “Blown Away,” as per the CBS synopsis, “When members of an NCIS Regional Enforcement Action Capabilities Training Team are killed during an explosion, NCIS Special Agent Jessica Knight, the lone surviving member, helps crack the case using high-tech body armour.”

In tonight’s NCIS episode a hostage situation got out of hand. Special Agent Jessica Knight of the NCIS acted as the hostage negotiator and she managed to convince the husband to release his wife. However, not long after the hostage was released, the building blew. The negotiator and her team had been inside the building when it blew up. Several members were killed including the husband they were talking down and two bodies were missing.

Knight and Special Madden’s bodies weren’t found with the rest. McGee and his team were brought in to investigate what happened and they went inside the building hoping to find the remains of two of their associates when they ended up finding Knight alive. She had been buried in the rubble. She was injured and otherwise, she’ll make it.

Knight surviving as she did was deemed a miracle. She was rushed to the hospital and she was still receiving treatment as the team began investigating what went wrong. NCIS originally went to the house to serve a warrant. Petty Officer Second Class Toby Withers was accused of stealing weapons and he was considered high-risk because of his ties to a white supremacist group. He did after all take his wife Tina hostage when he saw NCIS at his door.

Withers only released her after he found out she was pregnant and that he was going to become a dad. He seemed happy about the baby. He let go of his wife and everyone thought he was turning himself over but then the bombing happened. No one knew where the explosive came from. Knight was the only one with intel and the team couldn’t speak to her.

The hospital wasn’t allowing visitors. The team had to get evidence elsewhere and they did by using the bodies. It was clear Withers was near to the bomb when he died. Parts of the bomb melded into his skin when it exploded. Kasie ran an analysis on the bomb and she determined it was remotely detonated by an app on a cell phone. Everyone assumed it was Withers. It wasn’t until they finally got to talk to Knight that they realized he didn’t set off the bomb.

They visited her at the hospital. She told them everything she remembered. She said Withers detested cell phones because he thought that’s how the government was controlling people and he also didn’t have the opportunity to set off the bomb. He was being handcuffed by three agents when it happened.

Withers wasn’t the bomber. The bomber was still out there and no one was more dedicated to finding this bomber than Knight. She even tried to escape the hospital against the doctor’s recommendation. She was stopped by a nurse who apparently stopped her more than once and so she didn’t get to leave until she was properly released. Then she was told to take some days off. Knight ignored this recommendation and she returned to NCIS.

She later managed to get the team to agree to let her work the case for 48 hours. If she didn’t get results in 48 hours, she would have to go home and take the necessary days off. Knight was a known face in the building. She and Kasie were friends. She also did her best in proving her team was murdered by one of Withers’s militia friends.

Knight and her team had been wearing new technical gear. The gear determined where the signal was coming from and it even traced the cell phone used to detonate the device. Knight and Torres went to the location of the cell phone but the cell phone user was found dead. He was murdered. The bomber was identified as Richie Soren and it seems his real target was Knight’s team. It wasn’t even about Withers.

Soren called NCIS on Withers knowing that Knight’s team would respond and so the bomb was planted at Withers’s home as means of setting him up. Which didn’t work because Withers was Withers. He hates cell phones and he wouldn’t have used one to kill. He was in fact stealing weapons from the military to give to his “militia” friends which is a code word for white supremacists. And yet he wasn’t the bomber.

Soren was the bomber. His RV had bomb-making materials still inside of it and he was paid thousands of dollars before he set off the bomb. Then he was killed. Whoever hired Soren probably wanted to clean up any loose ends and he or she murdered Soren to keep him quiet. There’s no trace of this boss. The money Soren had on him couldn’t be traced and to make things worse suspicion was falling on of Knight’s team members.

Her friend Special Agent Eddie Madden was flagged. He was known for checking out millions of dollars of technical gear and it appears he was hoarding it as his house a possible means of selling it later. Eddie also had an advanced lung disease that he told no one about. And he made sure to cover up his theft by hacking the computer system to show he was somewhere else in the building when he wasn’t.

Madden’s body was found in the house. He died like everyone else and so he might have set up his team knowing that he was going to die anyway. Knight hadn’t wanted to believe that of him. She told McGee he was wrong when he first raised suspicions and it took her having to see him steal their gear on security footage to make her realize her friend might have been dirty. The team acted like Madden was dirty.

They were investigating where he visited and they found out he was seeing law offices as well as chemical laboratories. Those people didn’t seem like types who would buy stolen gear. The team investigated it and it was Palmer who found out the truth. The high-tech gear was what gave Madden lung disease. He had a preexisting condition of asthma and so that’s why he got sick while his team members were still healthy.

Madden found out their gear was toxic. He tried to build a case against the man who built and it was his boss who turned on him. The guy who sent Madden and Knight and all the others to the building. Madden went to his boss to report the issue and rather than tell their superiors what was going on – he went to the man who built the thing and he turned on his team for money.

McGee and Torres later arrested Kessler who built the gear while Knight arrested her boss. She got justice for her team. She also realized that she did need to take time off to deal. Knight didn’t have a family. She was an orphan and so her team had been her family. And she was going to need time to let them go.

And while the team was working on this case, Gibbs managed to find him in the middle of a new investigation. He and his journalist were investigating her friend’s death when they found out they were looking for a serial killer.