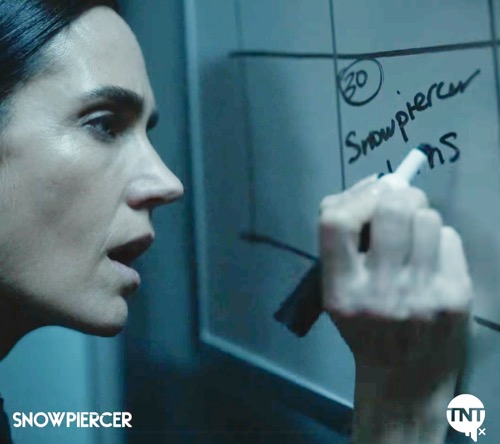 In tonight’s Snowpiercer episode Mel is outside in the snow in a suit digging around when she finds a body. She drags her equipment into the research center after chiseling the door open. Inside, she finds another body of one of the scientists. It appears both the dead killed themselves. They could no longer live in these conditions. She gets to work turning the machines on.

Mel discovers something is possibly wrong with the heat. She heads back outside. She has a flashback to toasting with Wilford when Snowpiercer first began. She heads back inside and finds an arm in the fridge while she has flashbacks about when Alex was a kid. She sees Wilford. She may be hallucinating because of the mountain air.

She heads to the calendar. She needs to make it a month. She gets back to work on a computer, still seeing Wilford. She links to the balloon then the data tower. She continues to joust with Wilford. She eats a little something. She doesn’t have much with her. She officially makes contact for the first time with the engineers.

Later, Mel wakes. Her crackers are missing. Could it be cannibals or is she losing it? She recalls her fight with Wilford when he was focused on building his brothel. She is more in saving mankind. They go round and round about priorities.

It’s been 10 days since Mel arrived. She needs to survive long enough to finish her mission with her food supply. She works outside and then comes in to eat a little. She sees Andre. He tells her she could just eat some of the bodies. She gets an idea and heads outside to cut a piece from a body. She heads inside and makes a contraption, slapping Andre a high five.

Mel sits and talks to Wilford as she continues to hallucinate. She recalls back to a time when people were going crazy as they got on the train. Others waited in the cold, screaming about how they had tickets. She sat waiting for her family. Mel moves back to her contraption. The rat is real and has been taking her food. She dips him in oil and then releases him. Finding his home. She cuts into the wall and locates a geothermal vent. She heads inside and sees Alex as she continues to hallucinate.

Mel sits with Alex and talks. They lay on sleeping bags. Alex tells her she understands why her mom left. Mel gets up after several more flashbacks of boarding the train. She begins to insulate the building. She then experiences equipped issues. Wilford chirps at her the whole time. She screams at him. He takes credit for caring for Alex. Mel throws an object at nothing.

She gets off the ground and returns to the facility. Inside, she gets the system back up. She tries to radio Alex. She tells her she tried. She thought this time would be difficult and she would get back to her. She hallucinates Alex forgiving her. She feels the train coming. She runs outside with luggage. But the train doesn’t slow. She seems Alex in the back window screaming. She drops to her knees.