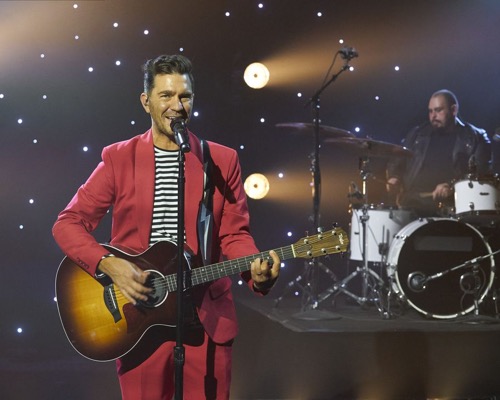 The Bachelorette airs on ABC this evening with an all-new Tuesday, November 9, 2021, episode, and we have your weekly The Bachelorette recap below. In tonight’s season 18 episode 3 as per the ABC synopsis, “Michelle is putting her foot on the gas, moving forward in her journey to find love, starting off this week with an adrenaline-pumping joyride at the BMW Performance Center alongside one lucky guy. Later, the largest group of men this season assemble for a slumber party date of epic proportions hosted by WWE Superstars

The Bella Twins. But while it’s all fun and games for the guys, their focus seems to be on anything but Michelle, leaving her feeling unseen in a way that feels all too familiar to her past and compels her to share her truth with the grou .”

Tonight The bachelorette’s episode begins with guys being relied that Jamie is gone, his actions were his downfall. They feel that Michelle is a strong woman. Meanwhile, Michelle is still in shock about what happened the evening before and if her intuition gives her red flags she is going to address it as it comes. She is looking for the guys to continue to be all in.

Rick is excited to see what the week holds, his bond with Michelle has to keep growing. This week there are two unbelievable one on one dates and a group ate. The first date card is for Martin, “let’s get love back on track.” Martin thinks this one on one date is the most important so far and he is super happy that he was chosen. Olu is kind of shocked, Jamie was close to Martin and he could be two faced, he doesn’t think that he deserves this chance. Little does Olu know, Michelle knows Martin was close with Jamie and she has her eyes wide open.

Today, Marin and Michelle at the BMW performance track, she tells him that they are going to be driving some BMW’s and she hopes he can keep up with her. They are both going to learn how to slide a BMW on a kick path to see who is the better drifter. Afterwards she tells him that she kicked his butt and they seal it with a kiss, then get changed and take a dip in a hot tub and pop a bottle of champagne.

They talk about what happened with Jamie, she says it was difficult. He says he is not trying to take his side, but he doesn’t think he is a bad guy. She says she was the only person that was in her and Jamie’s conversation, and she needs someone who trusts her for the decisions she makes. Michelle is not sure how to read Martin, but she did feel like her decision was being questions and that doesn’t make her feel good. During dinner, they talk about their beliefs in raising a family and seem to both bond.

The men receive another date card, this is for Will, Chris S.., Casey, Chris G., Leroy, Rodney, Olumide, Brandon, Clayton, Joe, Romeo, Nayte, “surrender to love.” This means Rick got the one on one date.

Michelle tells Martin that she loves how much he has opened up and how much he listens to her and it is not very common, she gives him the one on one rose.

The next day, the men are decked in their pj’s when Michelle comes in, this is the biggest group date that she has ever been on and she is interested to see how it goes. Today, they are having a slumber party. Growing up, slumber parties were the best and where she met two of her best friends. This date is about bonding and quality time. During the date, Michelle says the men were reaching into their inner man child a little too much and not spending time with her. Michelle was super excited coming into this but felt unseen during the date.

She doesn’t think it is intentional, but is how she feels. The curtain comes apart and the Bella twins are there, WWE superstars and they are going to pin down Michelle’s perfect match, the men are going to compete in The Ultimate Teddy Bear Takedown. Michelle is upset, the boys are not going to compete instead of spending time with her during the group date. Michelle doesn’t want to bring down the energy in the room so she says nothing and just tries to have fun.

They saved the best for last, Will against Olu; the black panther against a mouse. The men were divided into two groups, the one that Olu was on won. After the game, nobody talked to Michelle, nobody pulled her aside, she is not trying to sweat the small stuff but not being seen is truly hurting her. She is hurt, and wants to figure that out.

Michelle sits down with Kaitlyn and tells her that on the poetry date she wrote about growing up and being the only person of color in her classes, she was so overlooked at times. She wasn’t seen, and coming into this, she felt being in a room full of people who wanted to get to know her, she would never feel like that. She is frustrated and hurt.

Michelle joins the men who won the challenge and she says the last thing she wanted to do was change the energy, but she also knows that she just can’t put on a smiling face if she is not happy. She wants to be 100% transparent, she wishes she left the group date excited and great but that was not the case. Last week, she read a poem about not being seen, she was often times the only person of color not asked on dates, and she feels like she is putting in a lot of effort to have small moments with them and she doesn’t necessarily feel that that is being reciprocated.

That doesn’t mean she needs massive gives and gestures, she just wants a hello during the date. She thinks that her biggest fear in all of this is that she could commit to someone who doesn’t eventually see her and she has dealt with that before. She cares about all of them, there are conversations she wants to have with them individually. The men look shocked, they didn’t see that coming. After she has all her one on one chats with men, and Olu is reduced to tears saying he knows exactly how she feels, he knows his two sisters went though the same thing and he is truly sorry. Michelle gives Oly the group date rose.

It’s time for Rick’s date with Michelle, she tells him that they are going to go to higher altitude. She is excited to spend the day with him because he has always said that he sees her. The take a ride over the mountains, 8500 feet up high in the air. Michelle finds it very relaxing to be there with Rick in the nature. They find a wish box, people have actually written down wishes and put them in the box. They have to read the wishes, and then put their own inside.

Rick loves his date with Michelle, he says she encourages him to be vulnerable. They stop and share a bottle, kiss and connect. Later that night, the two sit down to dinner, he tells her that he wants to talk about family more. He says his family has always been his coach, there ae times that he was a good father, and there are times that he wasn’t. Two weeks before Christmas his parents went shopping, he was 17 and his father left his phone at home, and it was from a woman. A few weeks later, his parents split and they had to move out.

In the past few years his dad has been depressed, a friend went to check on him and he was gone. She says that everything that he has been through are also why he is this most amazing person that he is. He tells her that it means a lot to him. Michelle gives him the one on one date rose. She tells him that this was one of her favorite days, she could be herself with him and he made her feel seen, this is all she can ask from him. The two then head to a private concert just for them from Andy Grammer.

Time for the cocktail party, Chris S. gives Michelle a drink and decides he is going to make a speech. He says he wasn’t at the cocktail party the other night and he knows that Michelle said that she wasn’t being seen. He thinks there are guys there who think they have it in the bag, he thinks that is BS. They are not showing her the effort that she deserves and she should give other people the time they deserve.

She tells him that she appreciates him speaking up. It has been an emotional week, group dates have been difficult and nobody has it in the bag, not even close. She wants someone to see her as much as she sees them. Brandon steps up to speak to Michelle, Chris S. butts in and takes her away. He tells her what Nayte said, he didn’t care about the one on one date because he knows that he is going to go on one, so he doesn’t care. Michelle is disappointed, nobody has it in the bag. The other men think that Chris S. is desperate and wants to show himself as her protector, a strategic move. Michelle sits down with Nayte and tells him what Chris S. said.

Nayte then takes Chris S. aside and speaks to him about what he said to Michelle, he asks him if there is anyone else on his list, or just him. Chris S. says she asked, and he told, he came in on his white horse.

Joe sits down with Michelle, he brings a blanket and snacks, gets cozy with her and makes her smile.

Time for the Rose Ceremony, Michelle says the information that she heard tonight wasn’t easy, but she feels like she had the conversations that she needed to have and wants to move forward.

The first rose goes to Brandon, then Leroy, Joe, Rodney, Clayton, Casey, Nayte, and the final rose of the evening goes to Chris S., much to all the other men’s dismay. Michelle shares some big news, she is heading back to Minneapolis and they are going back with her. They are going to see what the mid-west is about.