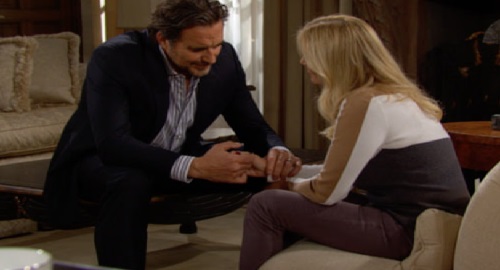 B&B fans know Ridge has just informed Hope Spencer (Annika Noelle) that she’s no longer welcome at the cabin – not as long as she wants Deacon in her life. Ridge can’t stop Hope from building a relationship with Deacon, but he’s adamant that she’s not going to do it anywhere near his home.

Ridge made it clear that Hope needs to pack up and get off the property, so Deacon may apologize to Hope after eavesdropping. Since Deacon never wanted to make trouble for his daughter, he may assure Hope that he’s willing to walk away if this is all too much for her.

Of course, Hope will insist that Ridge is out of line and may feel confident Brooke Forrester (Katherine Kelly Lang) will back her up on that. Regardless, Hope won’t let Ridge’s orders affect her desire to form a bond with Deacon – one that could last for many years to come.

As for Ridge, he’ll reconvene with Brooke and drop the bomb of what he just did. The Bold and the Beautiful spoilers say an outraged Brooke will naturally fight back. She’ll declare that’s her house and her cabin, so she won’t think Ridge has any business telling her who can and can’t live there.

Ridge will argue that they’re married and will think that entitles him to make decisions on an equal level. Brooke won’t agree and will counter that moved in with her. This isn’t really their place together in Brooke’s eyes, so she’ll insist Hope isn’t going anywhere. If Ridge doesn’t like it, then he can be the one to move out!

Back with Deacon, he’ll meet up with Sheila Carter (Kimberlin Brown) and most likely get updates on her latest stunt at the hospital. Deacon will then spill some news of his own – and it’ll involve a grand vision for the future.

Sheila will scoff at Deacon’s dream of a reunion with Brooke and their united family with Hope, but Deacon will stand by his goal. He’ll announce his plans and will have every intention of getting what he wants.

It sounds like Deacon will take Sheila’s advice about never giving up, but she’ll have her doubts about his ability to pull this off. B&B spoilers say Sheila may be underestimating Deacon’s resolve, so stay tuned! CDL’s the place to be for scorching Bold and the Beautiful spoilers, news and updates, so make us your number one source.