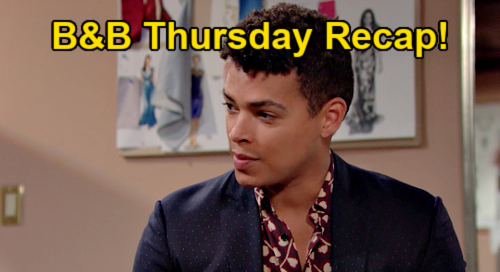 The Bold and the Beautiful spoilers recap for Thursday, January 7, reveal that Steffy Forrester (Jacqueline MacInnes Wood) and Liam Spencer (Scott Clifton) will continue their intense argument at the cliff house.

Liam will say that they have to find out if the baby is his or John “Finn” Finnegan’s (Tanner Novlan), and that they can’t keep this secret from Finn or Hope any longer. Liam will say that neither of them want to hurt anyone, but that the secret is weighing on them and that it isn’t good for the baby.

Finally, Steffy will agree, saying that Finn and Hope do deserve to know the truth. “This child changes everything,” Steffy will say.

Later, after Liam goes, Steffy will stare into space as the tea kettle boils. Steffy will look at photos of Finn on her phone and sigh sadly as she touches her stomach gently.

Meanwhile, at Brooke Forrester’s (Katherine Kelly Lang) house, Thomas and Hope will continue their conversation, with Thomas thanking Hope for all her support.

Soon, Hope will check her phone, and she and Thomas will wonder what Steffy needed to see Liam about. Hope will be confident that Liam will tell her if something has happened.

Thomas will note that Liam spends a lot of time over at Steffy’s place, and Hope will understand – after all, Liam and Steffy have Kelly Spencer (Colette and Avalon Gray). Hope will be steadfast in her trust and commitment to Liam.

Later, Liam will come home to the cabin, and Hope won’t be there. Liam will be visibly upset with what he has to do, as he gazes at pictures of himself and Hope. Hope will walk into the cabin, and she’ll wonder if everything with Kelly and Steffy is ok.

Liam will tell Hope that he loves her, and Hope will happily return the sentiment.

“I don’t know how I could have thought you’d betray me with Thomas of all people,” Liam said sadly. Hope reassured Liam that it was ok. “It’s not ok,” Liam will say. Hope will then start to get frightened, and she’ll warily ask what Liam’s talking about.

Liam will say that something happened, and that he’s really hoping that she can find a way to understand.

Zende will wonder if he’s driving Paris away, and she’ll say no.

Paris will avoid answering why she’s leaving, and finally she’ll reveal that she got a job offer from Ridge Forrester (Thorsten Kaye) to run the Forrester Foundation. Zende will think that’s terrific, and he’ll tell Paris that she can’t pass this job up.

Paris will say that she’d love to join the team, and that if it were up to her, she’d take it in a heartbeat.

Zende won’t understand, since Paris doesn’t answer to anyone. Then Zende will realize that this may have something to do with Zoe Buckingham (Kiara Barnes). “I’ll talk to her – you’re not going anywhere,” Zende will insist. “I won’t allow it.”

Over in the Forrester CEO office, Zoe will tell an incredulous Carter Walton (Lawrence Saint-Victor) that she doesn’t want her sister at the company. Carter will say that he thought it would be the perfect scenario, and that Zoe needs to tell him why she doesn’t want Paris there.

Zoe will be hesitant to say anything, and Carter will lament that he doesn’t want bad blood between her and Paris.

“I don’t get this – why don’t you want Paris to take Ridge’s offer?” Carter will ask. Zoe still won’t answer, saying that she knows Carter just wants what’s best for her and that it’s just typical sister stuff – no big deal. “I don’t want her here at Forrester Creations,” Zoe will say.

Thursday’s episode of B&B is going to be terrific, so be sure to tune in! Stick with the CBS soap and we’ll be sure to keep you informed on all the latest Bold and the Beautiful spoilers, updates, and news. Here at CDL, we’ve got you covered!