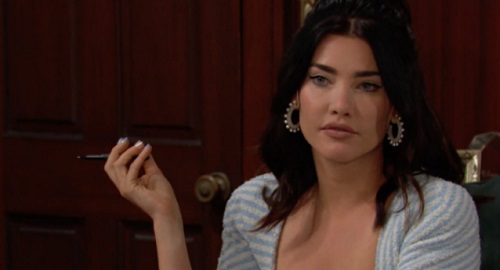 The Bold and the Beautiful (B&B) spoilers recap for Tuesday, October 5, reveals that Thomas Forrester (Matthew Atkinson) and Paris Buckingham (Diamond White) showed signs of their first spark while Steffy Forrester (Jacqueline MacInnes Wood) expressed how much she wanted her brother to move on.

At Forrester Creations on Tuesday’s B&B episode, Thomas admitted he’d been up all night working on something new. Hope Spencer (Annika Noelle) examined the design without speaking for a moment and suddenly created insecurities for Thomas. He suggested he hated it too, but Hope could tell he was proud of it and argued that he should be.

Hope gushed over everything she liked about the design and threw out some potential additions like studs or eyelets. Thomas seemed rather transfixed by Hope as she talked, so Steffy looked concerned as she walked in. When Steffy learned Thomas pulled an all-nighter, she wondered if he was trying to score brownie points with Hope.

Hope suggested if that was true, then it was working. She showed Steffy the design, so Steffy teased Thomas by calling it “not bad.” Thomas exchanged a slightly tense look with Steffy, who was sure he was very committed to Hope and her success. Talk eventually turned to Thomas’ love life since Steffy and Hope were curious if he was seeing someone new.

Meanwhile, Paris thanked Zende Forrester Dominguez (Delon de Metz) for summoning her since it got her out of a boring meeting. Zende let Paris check out his new design, so she insisted it was divine and showered him with compliments. Zende couldn’t focus since he wanted to kiss Paris, so he locked lips with her before they exchanged more flirty comments.

Once Paris and Zende joined the others in the main office, Thomas was glad to be saved from the love life interrogation. Since Thomas had heard about Paris’ excellent input, he invited her to join the meeting in the design office.

Paris left with Thomas and Zende, which gave Hope and Steffy a chance to talk privately. They were certain that Zende was Paris’ biggest fan and thought he really liked her. As for the topic of Thomas, Steffy pointed out that Hope spent a lot of time with her brother. She kept asking questions about what they talked about and wondered if Hope had picked up on anything.

Hope was curious what Steffy meant, so Steffy fished to find out if there really was another woman in Thomas’ life. Hope jokingly asked if Steffy wanted her to swear on a stack of fashion magazines that she knew nothing. Steffy believed Hope, but she pointed out Thomas wasn’t too lucky in love. She just really wanted Thomas to find someone and make sure he moved on from Hope.

Steffy talked about how sweet, handsome and charming Thomas was. Hope agreed and felt like it was only a matter of time until Thomas caught the eye of some lucky lady.

As for Thomas, he showed Zende and Paris a design he couldn’t seem to get quite right. Paris piped up with suggestions that surprised Thomas, who thought they could actually work. Zende gushed over Paris’ valuable feedback because she always comes at it a different way than designers do.

Thomas could see why Zende was so taken with Paris and thought she brought passion to everything she did. “Forrester is lucky to have you,” Thomas said.

After Zende got called away, Thomas was glad since that gave him an opportunity to apologize for how he treated Zoe Buckingham (Kiara Barnes) when they were together. He was sorry for using Zoe as part of his manipulation and genuinely cared about her, but Paris understood that Thomas just cared about Hope more.

Thomas hated that Zoe had to pay the price for his obsession with Hope, but Paris felt like Thomas had changed just like Zoe had changed. Paris mentioned seeing how great Thomas was at work and with Douglas Forrester (Henry Joseph Samiri). She believed Thomas when he said Douglas was the most important thing to him.

Paris insisted she had good instincts and didn’t think Thomas was all bad. Thomas could see what Zende saw in Paris since she was beautiful and had an incredible energy about her. Since Thomas once had big plans to be a family with Hope and Douglas, Paris wondered if it was hard working with Hope and co-parenting with her now.

Thomas admitted it was challenging, which is why he threw himself into work. Paris totally understood trying to put a lid on feelings and emotions. She turned Thomas’ attention back to the design, so he was once again impressed with her ideas. Thomas exchanged a smile with Paris as he said it’d be nice to work more closely with her and get to know her better.