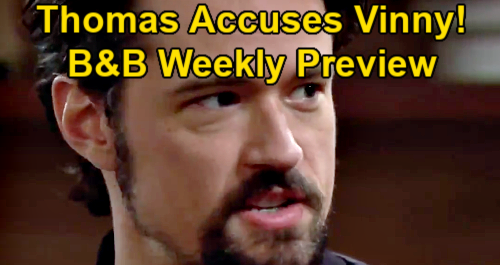 The Bold and the Beautiful (B&B) spoilers tease that viewers are in for some big developments on the CBS soap. The new B&B preview for the week of February 22 is out, and it’s all about the paternity test results that have shattered the lives of Steffy Forrester (Jacqueline MacInnes Wood), John “Finn” Finnegan (Tanner Novlan), Hope Spencer (Annika Noelle), and Liam Spencer (Scott Clifton).

The preview begins by showing the angst that Steffy, Finn, Liam, and Hope have been feeling since finding out that Liam is the father of Steffy’s baby. As B&B viewers know, both Finn and Hope have had a really hard time of it, with Hope in particular questioning whether her marriage can go on now that Liam and Steffy are having another baby.

Well, the B&B preview then moves into some very telling scenes. In the first, a lab tech is shown doing something very technical looking to what could be the paternity test samples. In the next scene, Thomas Forrester (Matthew Atkinson) is shown having a stern exchange with Vinny Walker (Joe LoCicero).

“Did you do anything to mess with Steffy’s paternity test?” Thomas urgently ask Vinny. Vinny responds by indignantly saying, “What is it you think I did?” Thomas angrily fires back, “Did you change the results to make it look like Liam’s baby!”

This is all very interesting on a couple of levels. On the one hand, the B&B preview seems to firmly establish that Vinny does have access to the hospital and the lab where Steffy and Finn’s paternity test was run.

The implied message is that Vinny could have done something to get that lab tech to alter the test results.

It’s fairly easy to put together a way that a Vinny-led switch could have happened, too. Vinny has been shown in recent weeks with illegal prescription-grade drugs on him. 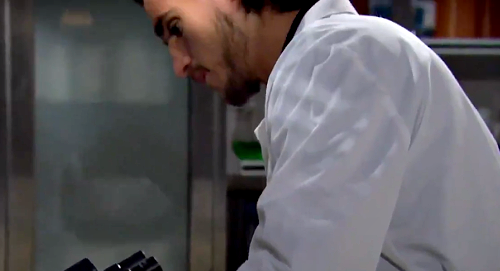 There’s got to be a reason why this was shown on screen, and perhaps Vinny is a drug supplier for a lab tech at the hospital, and Vinny called in a favor by asking the tech to change the paternity test results.

This would all mesh with what Vinny’s been saying for a while now – that he wants to help Thomas get Hope away from Liam and all to himself. Vinny has really been pushing Thomas to use the opportunity afforded to him by the paternity test results, and it could be because Vinny orchestrated the switch.

But there’s something else that’s interesting about Vinny and Thomas’ exchange in the new B&B preview video – Vinny seems pretty upset at Thomas’ bold accusation about him switching the paternity test results.

In fact, in the preview, Vinny seems pretty angry that he’s being accused of the switch, which could indicate that this whole Vinny angle is a false lead for viewers.

Whatever the case, the new B&B preview does make it clear that we’re going to see movement on the paternity test storyline, and soon. Once Thomas realizes that Vinny might have done something, he’s going to have some big decisions to make about what to do next and whom he should tell about his suspicions.

It looks like we’re in for an exciting week, so stay tuned! We’ll be sure to give you updates as more B&B news and spoilers come in. Remember, CDL is here for you, so you don’t miss any of the hot new soap updates. We’ve got you covered!

After hearing the test results, Thomas is suspicious…🤔 #BoldandBeautiful is new this week on @CBS and CBS All Access. pic.twitter.com/1uFryNJ6tI