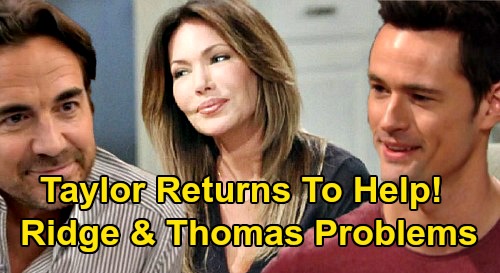 The Bold and the Beautiful (B&B) spoilers reveal that a big comeback is needed on the CBS soap. Many B&B fans want Hunter Tylo (Taylor Hayes) back on their screens – and that alone is a good enough reason for Taylor to return. However, there are plenty of other reasons why Taylor needs to come shake things up.

For starters, Taylor would provide a nice change of pace while still keeping the show’s history alive. Ridge Forrester (Thorsten Kaye) had some fun in Vegas with Shauna Fulton (Denise Richards), but is she true competition for Brooke Forrester (Katherine Kelly Lang)?

If B&B wants a real triangle, they need to level the playing field. Bringing Taylor back would be a great way to achieve that.

In other words, Taylor would be a better romantic rival for Brooke than Shauna. Quinn Forrester (Rena Sofer) also has a feud going with Brooke, but lots of viewers would rather see Taylor and Brooke reignite their war.

“Tridge” is long overdue for a reunion, so fans of the Ridge and Taylor pairing are patiently waiting for their chance to come around again. Plus, Taylor has kids on canvas – kids that need her! Thomas Forrester (Matthew Atkinson) could certainly use his psychiatrist mom’s guidance. Steffy Forrester (Jacqueline MacInnes Wood) could stand to have her mom around, too.

There are also grandkids that would surely like to see more of their grandma. Douglas Forrester (Henry Joseph Samiri) and Kelly Spencer (Colette and Avalon Gray) deserve more time with their grandmother. It’d be nice to see Taylor return for family bonding and a romantic reunion with longtime love Ridge.

Taylor’s comeback could bring some new story opportunities as well – and even the possibility of revisiting an old one. The Bold and the Beautiful fans will recall that Taylor shot Bill once upon a time, but maybe some rewrites could change the game. There might’ve been more to the story due to faulty memories and whatever else B&B writers want to cook up.

Of course, Taylor could also be involved in any custody battles that come along. Would Taylor really let Liam Spencer (Scott Clifton) and Hope Logan (Annika Noelle) just steal Douglas away from Thomas? Taylor could help Thomas fight for his son and his sanity. Thomas clearly needs help – and Taylor could be the person to provide it.