The Bold and the Beautiful Spoilers: Friday, August 2 – Thomas Desperate, Flees With Hope – Liam Battles To Save Beth’s Mom

BY hellodrdavis on August 1, 2019 | Comments: one comment
Related : Soap Opera, Spoiler, Television, The Bold and the Beautiful 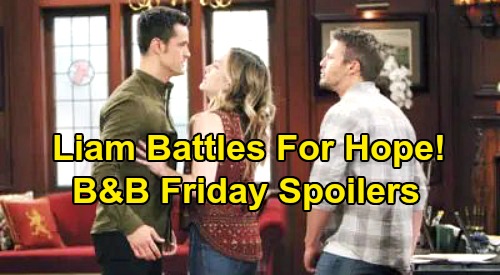 The Bold and the Beautiful spoilers for Friday, August 2, tease that Florence “Flo” Fulton (Katrina Bowden) will have some serious explaining to do. As B&B viewers know, she’s just tearfully admitted to Liam Spencer (Scott Clifton) and Wyatt Spencer (Darin Brooks) that she never gave birth to Phoebe Forrester (River Davidson and Madeline Valdez). And now, she’ll have to cough up all the details and deal with Liam’s anger and Wyatt’s absolute shock.

It looks like Flo will start at the beginning and explain exactly how this horrible nightmare started. Of course, Liam knows that something must have happened on Catalina Island on the night of Hope Forrester’s (Annika Noelle) delivery, but so far he doesn’t know that Reese Buckingham (Wayne Brady) was the origin of this whole mess. Flo will recount how she was called in to do a favor by Reese, her old friend from Las Vegas.

As Liam and Wyatt listen, Flo will recount all the events of the baby switch and adoption scam, including how Reese had delivered a stillborn infant in the Catalina clinic on the night that Beth Spencer was born. She’ll explain how Reese did the unthinkable and presented Liam and Hope with the stillborn baby, passing her off as their daughter.

Flo will also explain how she agreed to pose as a birth mother for Beth, not knowing at the time that the infant had been stolen from Hope after she passed out during the delivery. It probably won’t take long for Liam to put the pieces together and figure out that Reese must have been the anonymous colleague that Taylor Hayes (Hunter Tylo) had who arranged the illegal adoption of “Phoebe” to Steffy Forrester (Jacqueline MacInnes Wood).

Flo will also recount how others learned about the secret after the adoption had gone through. Liam will be furious to learn that Zoe Buckingham (Kiara Barnes) and Xander Avant (Adain Bradley) knew about Phoebe being Beth, and that Thomas Forrester (Matthew Atkinson) threatened them into keeping the secret. And he’ll be absolutely heartbroken to learn that Emma Barber (Nic Sioux) was on her way to tell Hope the truth about Beth when she had her fatal car accident.

After a lengthy tell-all process, Liam, Wyatt, and Flo will likely be emotionally drained, but according to B&B spoilers, Liam will be absolutely overcome with anger over what he and Hope have been put through – something that was entirely preventable if only Flo had come forward the moment she learned about the baby switch from Reese. And now that he’s got confirmation that Beth is alive, he’ll immediately want to get to Hope and fill her in on the amazing news.

As for Wyatt, it’s impossible to imagine the range of emotions he’ll be experiencing as a result of Flo’s confession. He’ll likely be angry, disappointed, and devastated by what his high school sweetheart has done to then people he loves. And according to ongoing B&B spoilers, he and Flo aren’t headed toward a place of forgiveness and understanding at all. Instead, Wyatt will soon be kicking Flo out of his life forever.

Meanwhile, on the new episode of B&B on Friday, August 2, Thomas will get some disturbing news. He will be hoping for a romantic and intimate night with his new bride, but according to B&B spoilers, something will suddenly take precedence. It seems that he’ll talk with Steffy by phone, who will probably want some answers from her brother about what’s just gone down at her house.

As B&B viewers know, Liam stunned Steffy by claiming that Phoebe was Beth, and as far as Steffy knows right now, Liam is operating on what Douglas Forrester (Henry Joseph Samiri) stated about Phoebe being Beth, which Douglas heard from Thomas. Steffy, thinking that it’s completely impossible that Phoebe is Beth, will likely rail against her brother for improperly telling Douglas a lie…and this will in turn tip Thomas off that Liam is onto him.

According to B&B spoilers, Thomas will then take drastic measures. He’ll be feeling desperate and will try to flee with Hope. How it all goes down, and how Thomas explains what he’s doing to Hope, remains to be seen, but ongoing B&B spoilers say that Thomas and Hope will eventually end up at Forrester Creations, where a huge showdown between Thomas and Liam will occur.