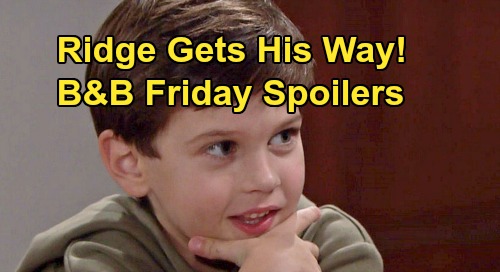 The Bold and the Beautiful spoilers for Friday, October 25, tease that things are really going to heat up in the battle over Douglas Forrester (Henry Joseph Samiri). As B&B viewers know, Ridge Forrester (Thorsten Kaye) and Thomas Forrester (Matthew Atkinson) just rushed to Brooke’s mansion to extricate Douglas from the clutches of Brooke Forrester (Katherine Kelly Lang), Hope Logan (Annika Noelle), and Liam Spencer (Scott Clifton). Ridge wasn’t messing around and declared that Douglas was going to be with his father and his blood relatives.

Of course, Hope and Brooke did their best to make a case for why Douglas needed to be kept far away from Thomas, but Ridge wasn’t having any of it. B&B viewers can expect the face-off to continue on Friday’s episode, but it doesn’t look like there will be any compromise here. In fact, if anything Brooke and Ridge will just get more polarized in their opinions and demands.

According to B&B spoilers, Ridge and Brooke’s marriage will be teeter on the brink as a result of this explosive scene. Ridge is quickly finding himself in a position where he’ll have to choose between his wife or Thomas, and Ridge appears to be at the point where he’s ready to choose Thomas and move on down the road. It’s really hard to imagine him reconciling with Brooke at any point in the future after her adoption papers stunt.

From here, The Bold and the Beautiful spoilers say Ridge, Thomas, and Douglas will head to the Forrester mansion, where they’ll move in with Eric Forrester (John McCook) and Quinn Forrester (Rena Sofer). Exactly how Thomas and Ridge are going to get Douglas away from Hope and Brooke remains to be seen, but there won’t be much that the Logans can do – after all, Thomas is Douglas’ father and has legal custody of him.

It should make for an interesting scene, given that Douglas is currently away from Brooke’s mansion, where the big showdown between Brooke, Hope, Ridge, and Thomas is taking place. It’s possible that Douglas will return home to find all the adults that he cares about in the middle of their big argument. It would certainly make for a dramatic moment if Thomas and Ridge were to take Douglas and walk him right out of the place. B&B fans can expect the Logans to lash out bitterly once Ridge completely stymies their plans.

At any rate, B&B spoilers say that Thomas will share some nice moments with his son on Friday’s episode. It looks like Ridge’s support will have snapped him out of his temporary funk when he was questioning his ability to be a good dad, because Thomas will talk with Douglas and vow to become the father that he deserves in his life. We’ll see how receptive Douglas is to all of this, and how he feels about moving to another living arrangement.