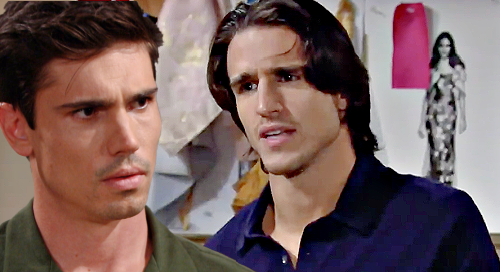 The Bold and the Beautiful (B&B) spoilers tease that Vinny Walker (Joe LoCicero) seems to have had a huge impact on a lot of people’s lives. As B&B viewers know, the paternity test conducted between Steffy Forrester’s (Jacqueline MacInnes Wood) unborn baby and John “Finn” Finnegan (Tanner Novlan) came back as not a match – something that devastated Steffy, Finn, Hope Spencer (Annika Noelle), and Liam Spencer (Scott Clifton).

But the show has dropped a lot of clues that Vinny may have been very involved in the paternity test outcome. Vinny got a new job that involves having a white lab coat, indicating that he could now be on staff as a lab tech at the hospital.

And Vinny’s been very invested in whether Thomas Forrester (Matthew Atkinson) is going to pursue Hope now.

Plus, the new B&B preview for the week of February 22 shows Thomas angrily interrogating Vinny about whether he might have messed with the results of the paternity test to make Liam look like he’s the father of Steffy’s baby. If Thomas is suspicious, then there must be a good reason!

Well, assuming that Vinny did switch the paternity test results to help Thomas out, the switch will have to be revealed at some point, and hopefully before Steffy’s baby is actually born, so that Finn knows it’s his baby.

But how will the big reveal be made, and who will be the person who ultimately makes that big reveal to Steffy and Finn?

We can think of several ways that this storyline could go. The first possibility, which is most obvious, is that Dr. Campbell (Tina Huang) herself could figure out that something’s awry with the results.

As Dr. Campbell told Steffy and Finn, the paternity test results came back as a simply yes/no type of answer, indicating a match or no match.

Presumably, that would mean that if Dr. Campbell took a deep dive into the full set of results, she might figure out that the yes/no test result had been altered. But of course, Dr. Campbell making the big reveal to Steffy and Finn wouldn’t be the most dramatic option, so it will probably be someone else.

Another possibility is that Finn might do some investigating and stumble upon the results, discovering that something’s awry. B&B spoilers say that Finn will end up seeing a familiar face in an unfamiliar place soon, so maybe he’ll run into Vinny at the hospital and put the pieces of the puzzle together.

There would be great dramatic value if Finn were the person who revealed the paternity test switch. Finn could have a big confrontation with Vinny after realizing that Vinny had access to the lab, which would be great to see. It would definitely be a big payoff for viewers, that’s for sure.

Of course, TPTB could go a different route and have Thomas be the one to share the paternity switch with Steffy and Finn.

Or Thomas could face a real moral dilemma – should he not say anything and prevent Liam and Hope from reconciling, or should he spill the beans and ruin any chance he’s got with Hope going forward?

There would be some great dramatic possibilities here as Thomas struggles to decide what to do.

It will be interesting to see what happens on this critical storyline front, but it’s probably safe to say that the reveal – assuming that Vinny actually did switch the paternity results – will be riveting and something that seriously changes the trajectories of Steffy, Finn, Hope, and Liam’s lives!

Who do you think will reveal the paternity result switch to Steffy and Finn?

Stay tuned to B&B and be sure to check in with CDL regularly so you don’t miss any of the latest Bold and the Beautiful spoilers, updates, and news. Check out our daily episode recaps, too!