Chicago Med Recap 11/16/22: Season 8 Episode 8 “Everyone’s Fighting a Battle You Know Nothing About” 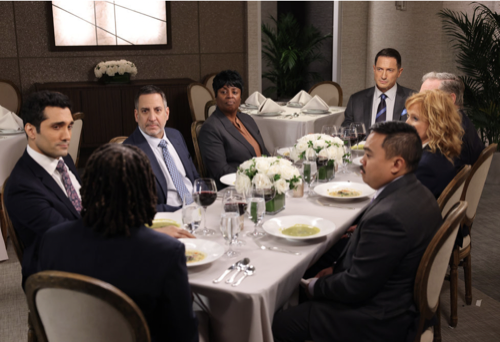 Tonight on NBC their medical drama Chicago Med airs with an all-new Wednesday, November 16, 2022, episode, and we have your Chicago Med recap below. In tonight’s Chicago Med season 8 episode 8 called, “Will, Crockett, and Justin Lieu (a new first-year resident) try to facilitate a trans-organ exchange.

Hannah and Nellie help a sexual assault survivor. Ethan and Archer treat a patient whose case could expose a fraudulent doctor. Grant and Maggie take a trip down memory lane.”

In tonight’s Chicago Med episode, Dr. Dean Archer was still taking pain medication. It’s been weeks now since he was assaulted. Yet, he was still in pain and so he was still taking pain medication. He should probably go easy on things. He knows that addiction runs in the family. He knows that he too could fall into an addictive relationship with his pain medication and rather than get help – he’s hiding it. He’s hiding that he still takes the med. Not even Dr. Choi knew. Choi and Archer were great friends whose relationship goes back to the time they were both in the military together. Choi would understand only Archer didn’t want to tell anyone about what was happening. He instead wanted to focus on work.

Archer kept his head down until the news about an impending wedding started to make the rounds. Dr. Choi and April sent out wedding invitations. Those two were finally making it permanent. They were in love and have been in love for years and so everyone was happy for them. They were happy that those two didn’t blow it again. Maggie was especially pleased. Maggie was going through a lot right now with her own ex-boyfriend. He was the father of her daughter. The same daughter they put up for adoption and who came back into their lives as an adult, but Maggie told Grant that she doesn’t want to be in his life.

Grant chose to ignore her telling him to back off. He kept coming around. He kept trying to see her and he was being a real nuisance now. He even stopped by the hospital on tonight’s episode with something he just had to show her. Maggie told him she was working. He said she was the only one who would understand and he convinced her to come outside with him. Maggie was off with Grant while Dr. Charles was congratulating Choi. Charles was happy for the couple. He did tell him though that he barely had time to brush off his tuxedo for the wedding and that was because the wedding was happening fast.

Like real fast. Like before they could second guess the decision. Choi was telling Charles all about it when they overheard someone calling for help and they rushed to provide aid. They weren’t the only ones doing that. Dr. Asher and Dr. Cuevas were doing the same. They were in the admittance room going through the vending machine for breakfast when they overhead a distraught girl. She didn’t want to give her name or her insurance. She just wanted to see a doctor. The two doctors went over to her. They informed her they were doctors and it wasn’t until she agreed she would be confident that she admitted her name was Gloria.

Gloria went to a party at a warehouse. She was supposed to have met up with her cousin. She never found the cousin and she blacked out after only one drink. She later woke up at the warehouse. But without her underwear. She wanted a rape kit done. She also wanted to file a complaint anonymously. Gloria didn’t want the report to come back to her. She didn’t want to give her information. She only agreed to the kit because she wanted to find out if she really had been assaulted. Asher and Cuevas supported her through the process. They were doing so when Maggie found out about Grant’s surprise.

Grant fixed up his old car from high school. The one that impressed Maggie back in the day. Maggie has such fond memories of that car that she agreed to go in one short spin around the block and unfortunately, they got into a car accident. Grant had to be rushed back to Chicago Med. Maggie was fine. She didn’t take the worst of it. It was Grant whose leg got banged up. Dr. Halstead was working on him. Halstead was showing around the latest intern. They were already working on a teenage girl that needed a liver transplant when this came around. And so Halstead did his best for Grant while Sharon checked up on Maggie.

Maggie didn’t want to be judged for being in the car with Grant. She also claimed that her husband was away at a teacher’s conference in Florida and she didn’t want to bother him or tell him she was in an accident. Maggie dismissed her car accident the same way Gloria dismissed what happened to her. They did find out she was assaulted. Asher asked Gloria to file an official complaint with the police. She didn’t want to do that. Cuevas only wanted Gloria to be comfortable and so she stopped Asher from pressuring Gloria into going to the police. Then Detective Upton stopped by. Upton said another girl was raped at that same warehouse party. And Asher wanted to tell her about Gloria only Cuevas stopped her.

Asher is a good person. She wanted to do right by Gloria. But Cuevas is also a good person. She realized there could be plenty of reasons why Gloria doesn’t want to go the cops and one of them could be because she’s undocumented. Cuevas was also undocumented. She was legally allowed to be in the US because a doctorial grant allows her to be there and yet if she didn’t have it then she would also find herself deported. Cuevas came clean about her immigration status to Gloria and Asher. It was enough to convince Gloria to talk to the cops. And so her rape kit became official.

Maggie thought to keep her car accident away from her husband and Sharon asked her how she would feel if the shoe was on the other foot.

Dr. Marcel was able to get a teenager a liver while at the same time providing another a patient a kidney. He did so by performing the first organ exchange at the hospital. It saved two lives. It also made him realize he should go to the charity dinner to help raise money for the hospital. And it’s a good thing he did because he helped raise enough money for a medically advanced operation room.

But the patient that Choi and Charles saw was a victim as well. He was a victim of Medicaid fraud. Some recruiter took him to a hospital in Wisconsin where he was treated for a made-up condition and everyone got paid. Only the patient has prostate cancer. He could have been saved if his cancer was actually diagnosed in time and now a homeless man was going to die and Choi wanted to help more unhoused people before they too become victims of Medicaid fraud.