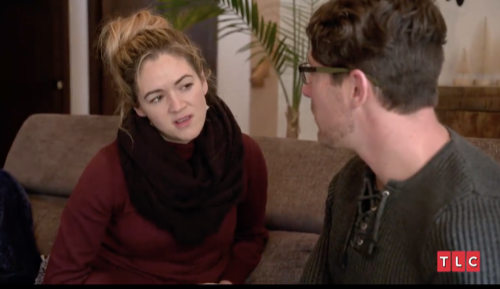 Sidian courts Arielle as Tosha’s mom questions the lifestyle. The Davises get serious about Danielle joining their family. Marcus pursues Janae, but she isn’t sold yet.”

In tonight’s Seeking Sister Wife episode, the Jones family was up first. Sidian was overseas visiting potential wife, Ariel. Ariel has never been in a polygamous relationship before and, while Sidian may have some small experience, it wasn’t by much. Sidian was married to Tosha. They tried bringing another woman into the relationship before. It didn’t work out. The woman in question was no longer a part of their lives and so neither Sidian nor Tosha were in a rush to get rejected again. They took their time with Ariel. They closely vetted her. Sidian even flew to the Philippines to meet Ariel in person. He was given the go ahead to sleep with Ariel before he got on the flight and that seems to have helped them get over the initial awkwardness.

Ariel is a great young woman. She’s beautiful. She’s smart. She’s even considerate. Something that’s needed to survive a plural marriage and so Ariel seemed like she was ready to join their family. Tosha had called Sidian while he was with Ariel. Both Sidian and Ariel spoke to Tosha on the phone. She called because she was feeling lonely and the two of them did their best to reassure her. They were going to be a family. Tosha will never have to be alone again. That’s how they all currently felt and hopefully it stays that way. Sidian and Tosha were putting themselves out there for Ariel and she’s never made excuses on not being with them or talking to them.

Something the Merrifields couldn’t say about their own potential wife. Danielle and Garrick were dating a young woman by the name of Roberta. Roberta was in Brazil. She went there to go look after her mother who had needed her, but since she’s gone down, she hasn’t been keeping in touch with the couple and there’s no guarantee that she’s willing to board a flight to join them in the States. They couldn’t even get Roberta on the phone much less on a plane. Roberta was approved for the K-1 visa. She can board a flight at any time. Only she was holding off on that for now. The couple were instead going to visit her.

Danielle talked about it with her brother. Her brother was worried about Roberta joining the family. There was no telling what Roberta’s motives were or that she would be willing to leave her mom. She was already hard to get in touch with. She was also talking about having a baby right away and Sam thought that was a red flag. He wondered what would happen if she does get pregnant on their trip to see her only for her to decide not to come to the United States. What would happen then? Sam posed an important question. It made Danielle think. It also made her have a conversation with her husband in which she brought Roberta.

Danielle questioned if they should put off on Roberta having kids or getting pregnant. At least until she gets to the United States. But Danielle and Garrick spoke to their immigration attorney about Roberta’s situation. If she misses out on her visa this time, it was going to take about another five years before she gets approved for another visa. There would also be doubt about approving her again because immigration would want to know why she didn’t travel on the first visa. Danielle mentioned this to Garrick except he didn’t really want to hear it. Garrick wants to get pregnant with Roberta right away.

Garrick didn’t care if Roberta got stuck in Brazil for another five years. He already considers her family. He was fine with having kids with her and those kids staying with her in Brazil until she finally came up. Garrick didn’t consider what it would mean for him to constantly travel back and forth while Danielle thought about everything. Danielle didn’t want their family to suffer with Garrick trying to split himself into two. If Roberta didn’t want to put their family first, why should they risk what they have by trying to force the relationship to work? Danielle was thinking about all of this and Garrick was too set on Roberta to see the possible fallout.

Then there were the Epps. Marcus went on a date with a woman he was hoping would become his third wife and the date didn’t really go all that well. Janae was a great woman. She was the full package. She also heard he had two wives and looked at Marcus like he was crazy. Janae didn’t call him crazy. She gave him a look, but she didn’t call him that word. She wanted to be openminded. She heard him out. She asked him questions. Marcus did his best to sell her on the polygamous lifestyle. He even told her about dating Bina. Which again seemed to be a little too much for her. And so Marcus suggested introducing her to his wives.

Janae doesn’t see polygamy for her because she’s never seen that lifestyle for herself. Marcus told her how the sister wives supported each other and how she will never be alone or feel lonely. He also mentioned that her meeting his wives would help her picture a future with them.

As for the Davis family, they were still considering whether or not their potential wife Daniel was ready to join their family.