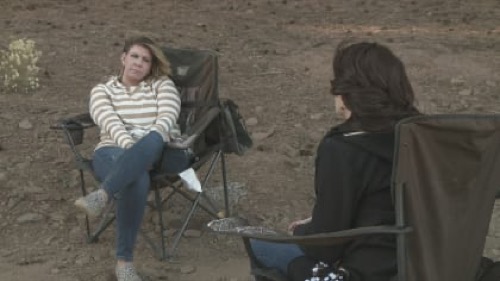 TLC’s reality show about a polygamist family Sister Wives returns tonight with an all-new Sunday, January 9, 2022, season 16 episode 8 called “Two Cliques,” and we have your weekly Sister Wives recap below. On tonight’s Sister Wives season 16 episode 8 as per the TLC synopsis, “The Brown family grows more divided than ever; Christine and Janelle must choose between seeing Kody and seeing their older children; Robyn and Meri follow Kody’s COVID rules so they can have Thanksgiving with him..”

In tonight’s Sister Wives episode, Kody doesn’t have the support of the family. He lost it. He lost it during lockdown and now things are awkward between everyone. Even Meri and Robyn weren’t okay. Robyn was very sensitive lately because Kody has been staying at her house and he doesn’t really see his other families. Some people thought Kody’s Covid restrictions were in fact Robyn’s rules. But Meri made a joke about Kody not remembering them and Robyn chose to get offended at this joke. The two women later met up and they talked it out. Meri mentioned that Robyn shouldn’t have gotten offended. They also talked about why they haven’t seen each other sooner.

Meri was one of the few people that religiously followed Kody’s guidelines. She lives by herself and she doesn’t go out or risk herself. Meri thought she would at least get to see Robyn’s kids if she followed the rules, but that never panned out and Meri is lonely. She doesn’t have anyone in Arizona. She doesn’t even have a husband. Kody doesn’t want a marriage with her at all. He told her that they were friends and that’s it. Kody doesn’t want to work on the marriage. He doesn’t want try and salvage what they could. He just gave up. He gave up on Meri. He doesn’t even treat her as a good friend.

Kody doesn’t call her. He doesn’t visit her. He leaves her ostracized and Meri was sick of it. Janelle and Christine both thought that at least Robyn would reach out to her and she hasn’t. Robyn has failed her sister wife. Janelle and Christine at least have each other. Their children needed each other during lockdown and so they both followed their own guidelines to make sure their kids were safe. This angered Kody. Kody stopped coming around. He also made certain demands. He told Janelle to put her kids out of the house if they didn’t follow his rules and she told him to f off because her kids come first.

Both Janelle and Christine were going to Utah for Thanksgiving. They didn’t care about being around Kody while he finally deigns with his presence and the last family meeting went south. Christine was actually shocked by Janelle’s reaction. As far as she knew, Janelle and Kody’s relationship was good. It wasn’t like it was between him and Christine. Christine has been neglected since the move to Arizona. Kody only visited her at night every three days and he would have dinner if with family. He might also play with his daughter Truly. But that was it. Kody let his relationship with Christine fail and he neglected just as much as his relationship with Meri.

Kody has checked out. He was the first to do so. No one compelled him into doing it and its why his kids felt neglected. The only ones not feeling the neglect are Robyn’s kids. They get quality time with their dad. After they talked, Robyn had Meri over at the house. The kids were so excited to see and able to touch Meri. It had been a happy surprise for them. Robyn didn’t say anything because she hadn’t wanted to ruin it if Meri’s ten day quarantine didn’t work out and thankfully it did. Meri came over. The kids loved seeing her. They caught her up on everything that’s been happening and they had fun.

Meri got emotional while there. She finally felt like she was a part of the family again and that she meant as much to the kids as they mean to her. Seeing Meri also helped take off the sting of the later news. Robyn later broke it to her kids that the family won’t all be together for Thanksgiving. But she didn’t break the news right. Robyn started off by telling them that the others didn’t want to follow dad’s rules and that’s why they weren’t meeting up when she could have said it differently. She could have said that the others wanted to visit family in Utah. Which is the truth. They did want to see family in Utah and so Robyn framed it to make it seem like the other families were choosing Utah over the kids.

The kids naturally were upset by the news. Robyn didn’t try to make excuses for the others, but she also threw the other families under the bus and no one noticed it because she said she was also hurt by Janelle and Christine’s decision to move to Utah. Robyn and her family later celebrated with Meri. They took photos. They had fun. Robyn even did the turkey this year and Meri surprised everyone with a dessert turkey. Meanwhile Christine and Janelle both had a fun time in Utah. They enjoyed themselves so much that they didn’t bother to reach out to Kody or check in with him. Janelle was also questioning if plural marriage is still for her.