BY Kristine Francis on July 13, 2022 | Comments: Leave Comments
Related : Reality TV, Recap, So You Think You Can Dance, Television, TV 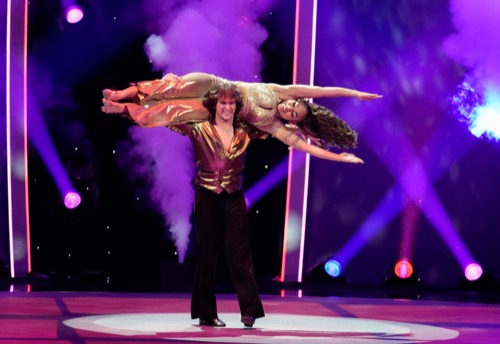 Tonight on FOX their Emmy-Award Winning So You Think You Can Dance airs with an all-new Wednesday, July 13, 2022, season 17 episode 8 episode and we have your SYTYCD recap below! In tonight’s So You Think You Can Dance season 17 episode 8 called, “Turn Back Time,” as per the FOX synopsis, “And then there were eight! The Top Four dancers from last week will pick their partners and dance in random genres.

Then, all eight dancers will showcase their talents in solo rounds to win over the audience and our expert panel of judges. Two dancers will face elimination and only six will remain in the all-new “Turn Back Time” episode.”

In tonight’s SYTYCD episode, the show turned back the hands of time. Each pair took on a specific era in their dance. The couples were also given all new partners for their night full of nostalgia and up first were Beau and Ralyn. They were given 50s-themed jazz. The dance was all about falling in love with each other. Something that Ralyn found to be really hard. Beau was her friend. He was her big brother. He just wasn’t her love interest and so she struggled with committing to the dance during practice. The struggle did carry across to the actual performance. They lost their high-energy intensity. They didn’t sell the story of being in love. And it ended very disappointingly.

There was a lift in the routine that didn’t go off as planned. Ralyn stumbled. She also wasn’t fully invested and it was clear from the outside looking in that tonight just wasn’t her night. She didn’t even buy into the story. The next performance came from Waverly. Waverly loves dancing. He grew up getting into trouble because he would never sit still. He just wanted to dance too much to do anything else. His Contemporary solo performance was a nice treat between performances. Anna also had a Contemporary solo. Her very first performance was a jazz routine as a little girl. She was actually on stage when someone’s pin went right through her shoe.

Anna could have let that set her back. But she instead danced on. Much like her solo performance tonight. Now, the next performance was a Disco 70s. Essence and Keaton. These struggled during practice with their lifts. They were certain lifts that required both of them to put the work in only Essence wasn’t used to be lifted. She was a Hip Hop dancer. She had needed to get used to it and by the time they hit the stage for that final performance – she was prepared to be helicoptered in a lift. There were some technical flaws. The show was too deep into the competition for those flaws to be ignored and so JoJo pointed them out.

JoJo also said that Keaton was very much highlighted during this dance. He was a great disco dancer and, while she wasn’t into men, JoJo did say she saw his appeal. It was just these mistakes by the way. The judges were looking for them and so everyone had to be at their best. Carter had a solo Ballroom performance. He did an upbeat Latin Ballroom dance. He brought the personality. He also brought high energy. The contestants didn’t make it into the top eight without it. They just have to maintain during their duet performances. And up next was another solo from Alexis who was another Ballroom dancer.

Alexis’s first performance was in Ballroom. She wasn’t like Carter whose first performance was actually in a country dance about a farmer and a chicken. Alexis actually wore the beaded dress needed for the Ballroom. She loved seeing that old video of herself. She said she found what she loved the most. Next up was another duet. This time from Waverly and Anna who did a high tempo 80s routine. Their choreographer was, unfortunately, unable to be in the studio with them. He had to teach them over Zoom. And unfortunately, certain things have to be taught in person because they get lost in translation.

Which was the case with this dance. There was a disconnect between Anna and Waverly. They didn’t have the necessary chemistry that often takes weeks to build up to and which they had to create in a day. But the dance was fun. It brought back an amazing time. Its just that neither Anna or Waverly did their research on that era. Neither was alive when it originally happened. It showed and so the duets weren’t perfect. The solos were much better. Beau had a solo performance where he was back in heels. He was giving face. He was giving energy. He was at his best self during his solo and the judges needed to see that during his duet.

The same could be said of Ralyn. Ralyn had her solo next and again it was beautiful. It showed great skill. The last part just wasn’t in the duet. All the solos had something great about it. Even Keaton’s solo showcased amazing form. It was in fact much better than his duet. As for the last performance of the night, that went to Carter and Alexis who performed a Contemporary 90s number. This dance was based off their great chemistry and many years of knowing each other and it was one of the most perfect routines in the competition. They were the only ones who understood the dance. And they brought the 90s back.

But in spite of the great performances, four dancers were in danger of going home tonight. The bottom four were Waverly, Ralyn, Anna, and Beau.

The two dancers eliminated tonight were Anna and Waverly. Their time on the show has come to an end, but they should never stop dancing because they are truly talented.